Njugush' embarrassing encounter with a fan 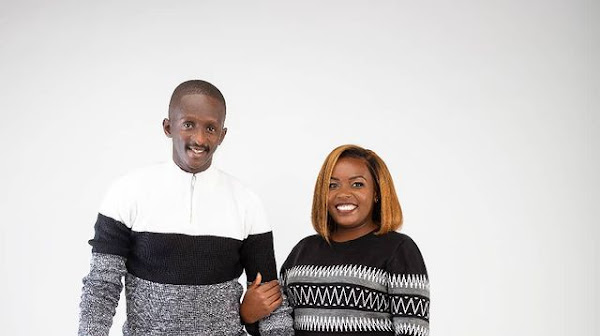 Njugush and his wife Celestine

Timothy Kimani Ndegwa popularly known as Njugush has opened up about some embarrassing moments in his life.

The 31-year-old revealed this during an interview on Vincent Mboya's YouTube channel.

He started by revealing the fact that the sweetest thing he has done for his wife is cooking for her a specialty only he knows of apparently consists of mixing ugali (corn flour) with carrots and potatoes.

He jokingly added, " that was very sweet, I lied to her that it's a cultural delicacy and she enjoyed it. Little did she know it was because I was broke."

Later on when asked about the most embarrassing

(There is a plus-sized female who came running towards me and we both fell.)

He went on to add that the fan knocked him off his feet jokingly attributing the fall to the fact that he had not dined well during that time.

" sahiyo sikuwa nimekula vizuri. Tulianguka, eehh tulianguka na yeye town. Getting up from there, was the longest one minute of my life." The father of one revealed stifling a laugh.

Njugush also revealed that he is a sucker for nature and water bodies.

Speaking about his ideal hangout, Baba Tugu said, "It has to be by the river, by the lake, next to a water body. by the ocean/sea"

Njugush and his wife Cele revealed three months ago that they were expecting their second child.

Celestine stepped out on in May with a red dress that showcased her baby bump after several months of keeping the news low-key.

This was during their 'TTnT' show at the Nairobi Cinema.

After the show, Celestine shared a photo with her husband and her son with the caption;

"Thank you so much Wapendwa!!! Nyinyi ni wale wasee. In case you missed the live recording, worry not!!! Links coming up from this Monday #TTnT3."

Director Phil said Kate's self confidence is on another level and she's a courageous woman.
Entertainment
3 weeks ago

Check out how your favorite celebs marked Valentine's day

One thing I noticed though, in 2022 celebrity couples went easy on this lovey dovey competitions trying to outsmart each other with unnecessary ...
Entertainment
5 months ago
WATCH: For the latest videos on entertainment stories