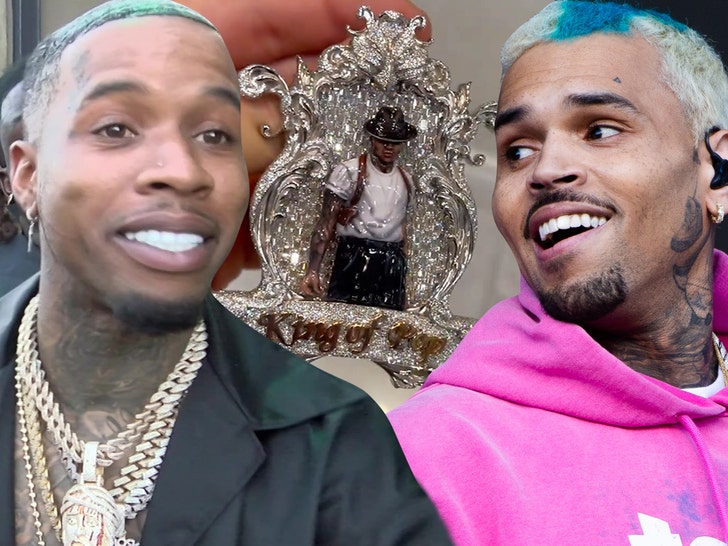 Tory Lanez on the left with Chris Brown

Canadian rapper/ songwriter Daystar Shemuel Peterson popularly known by his stage name Tory Lanez had the internet going crazy as he recently surprised fellow artist Chris Brown in Toronto with an insane diamond studded chain that crowned CB as the undisputed “King Of Pop” over the late Michael Jackson.

Tory revealed that he had actually been working on the neck piece since March and all the exclusive details in ain't lying.

The chain has Chris Browns details captured to perfection from CB’s tattoos and to the pose.

And it’s more than just a chain, well it is has over 40 carats of diamonds on the pendant and another 20 carats on the chain but that is not what I mean.

It is super sentimental and thoughtful.

The back of the customized neck piece features a list of CB’s musical accomplishments, such as award show wins and sales milestones.

Tory posted a video showcasing the gift and captioned it, "@chrisbrownofficial IS THE KING OF POP WHEN IT COMES TO MY ERA AND MY GENERATION …….IDGAF"

The super expensive and thoughtful gift comes in a month after Chris himself had to shut down an online debate that was going round trying to determine between him and the late Michael Jackson who was in deed the King of Pop.

During an interview on "Big Boy's Neighborhood", the L.A. radio host brought up the then trending debate to which the 'New Flame' hit-maker addressed the issue for the first time and well Breezy said that if it wasn't for the late Michael Jackson, he wouldn't be anywhere near the entertainer he is today.

The 33-year-old went on to add that he actually has a shrine he has dedicated to the late King of Pop.

Although fellow artists such as Fivio Foreign and Tank during the debate had been leaning towards giving CB the ultimate crown, however  Chris himself said he'll never surpass MJ and adding went ahead to concede to the man who brought us "Thriller," "Rock With You" and "Billie Jean."

But it seems to friends such as Tory, Chris is King whether he admits it or not.

their encounter proved that it was consensual.
Entertainment
5 months ago
WATCH: For the latest videos on entertainment stories