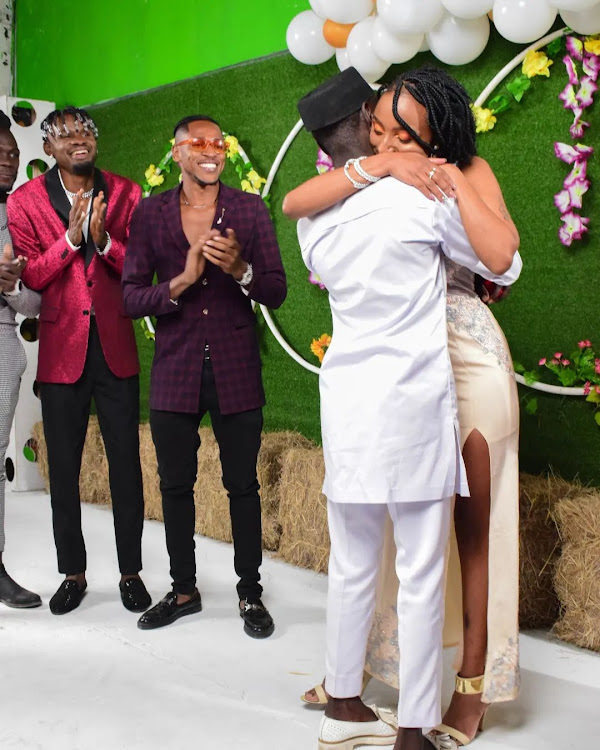 Stevo Simple Boy's unveiled a video showing his lover, Jenny Wangui sobbing as she spoke lovingly about their relationship.

Jenny explained how Stevo had made her believe in love. Love is not all about money," she started. "I can't wait for our big day which is very soon from now. I am really happy."

She then went on to praise her man for how he takes care of her. Watch the heart-rending video below;

In his caption for the video, Stevo thanked Jenny for the support that she had given him over the years.

He then made the startling claim that his lover was the one who had financed his first music video.

"Hakuna mtuu aliyejua video yangu ya kwanza wewe ukasimamia na hela zako kilichonivutia sana." (No one knew my first video, you managed it with your money, which really impressed me)

He then reiterated his earlier comment about marriage saying that he would marry her now that the elections had passed.

"Na nilivyokuahidi kufunga ndoa na wewe Baada ya uchaguzi siku kuu imekaribia 😢❤️" (And as I promised to marry you after the election, the big day is near 😢❤️)

And Stevo wasn't done,  he then went on to post another love letter telling his fianceé,

"Your happiness is my happiness, the little happiness we will get, we will thank God.

You have been through a lot, but I believe God will make things OK, my darling, baby, I love you so much 😢😍😘"

In another post he made, Stevo also said that he was ready to get married to Jenny.

The rapper whose phrases normally take a life of their own disclosed this information on his Instagram page.

He then went on to appreciate the sufferings he had gone through to get to this point in his life.

"Asante angalau nina furaha kwa jeraha nilizopata maishani na siku imekaribia." (Thank you at least I am happy with the injuries I suffered in life and the day is near)

His two posts attracted many fans who celebrated the two lovers with supportive comments.

Many Kenyans love Stevo for his happy-go-lucky nature and perceived authenticity in his actions, there are some who say his recent antics have been clout-chasing.

I hope this romance is the real deal and not some silly publicity stunt.

Bungoma rapper said he was dating Gee for months.
Trending
4 months ago

Stevo said he feels Kamene's bae doesn't deserve her and she should leave him and come start a relationship with him
Trending
4 months ago
WATCH: For the latest videos on entertainment stories