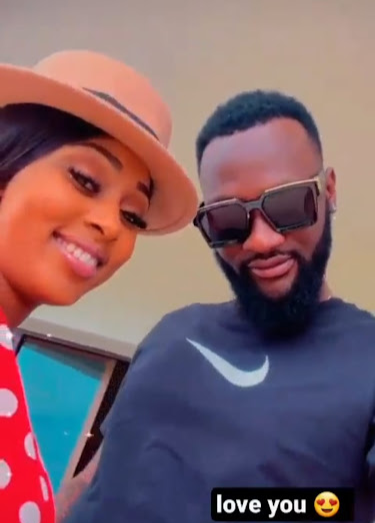 So one of our favorite socialites, Amber Ray decided to give us a 'tell all' exclusive on her Youtube channel.

Speaking to own of her close friends, Shicco Waweru, Amber got into pieces of her controversial life that she feels her fans have numerous questions about and it was finally time to set the record straight for them.

She said the video was inspired in a bid to tell her side of the story and even revealed that her teenage son was initially against the idea of Amber doing the 'tell all' advising his mom that she did not have to dispute any rumours.

" Gavin was around and he had me say that I was going to do this video and he was like 'moom no! Why do you want people to know you? They shouldn't know you." Amber said between nervous giggles.

On whether she was the one who made the first move on her now ex boyfriend Sierra Leon basketballer, Kabba, Amber revealed that indeed she was. " I'll say yes, yes and the thing is then I was single and when I made the firs move I was very straightforward. I told him no strings attached." Amber revealed.

She went on to add, " I told him what I really wanted, and I told him I was not ready for a relationship. I told him can we just have fun and he agreed to it."

Amber said that she though everything was clear so she does not understand where his bitterness comes from.

" Honestly when I see him throwing tantrums on social media I get so confused because I knew we had an agreement of no strings attached." The mother of one added.

The entrepreneur went on to clarify details of her infamous video that was posted of her drunk crying at the gate.

She said it was taken out of context and people did not really understand what happened on that day. She was not crying over Kabba rather because of Kabba.

" We had an argument and I was high, he did not use to drink and he is the one who even took the video. So while arguing, he snatched my phone at around 3am and started walking away, because I did not want to go with him to his place, " Amber started off the narration.

" I removed my shoes because I was high and I started following him. I was hurrying to tell the soldiers not to allow him to leave with my phone because for me that is my office." Amber continued as she got emotional.

Chocking back tears she added, " he then started lying to the soldiers and using the fact that I was high against me. When we got to the car he lied and said he hadn't taken my phone and the guards believed him because he even lied that he was in Kenya because of me and then I got so dramatic because I felt so helpless."

Amber said she knew she was being recorded but at that moment she did not care because she badly wanted her phone back, citing she did not fully trust Kabba nor know what intentions he had when he snatched her phone.

'I pity the man who dates Amber,' Kabba says

'Most of you date for survival not to love,' Amber Ray's ex throws shade

'The Juju didn't stay on me,' Amber Ray's ex

Amber Ray was dating a Sierra Leonean basketballer
Entertainment
4 months ago
WATCH: For the latest videos on entertainment stories