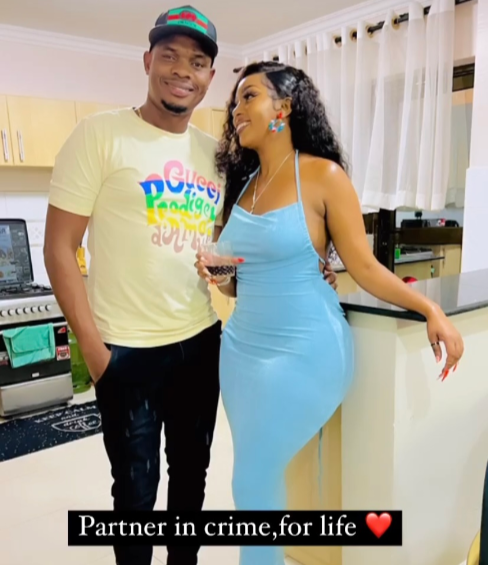 It seems 'Partner in Crime' has decided he does not want to engage in 'crime' anymore. If you are a little lost, two months ago in one of his stories Kennedy posted a cute photo of him and Amber and captioned it "partner in crime, for life.." accompanied with a love heart emoji.

But it seems for life was shorter than any of us could have predicted,

In a Q and A session with her fans, Amber Ray revealed that her relationship with Kennedy Rapudo hasn’t been working, and therefore, they both decided to call it quits.

A curious netizen posed the question, "Are you still dating Kennedy?”

To which Amber responded by revealing that she was tired of pretending, adding that her fans would confuse her for a joker at this point.

"I know mahali imefika, I might look like a joker but manze, I don't know how to pretend. If it's not working, it is not working. So munipende tu vile niko,(Just love me the way I am)." The mother of one wrote.

Another netizen asked her to give relationships a rest at this point writing, '" seems like love is not your thing Mama Gavin." But Amber was not having it. She replied saying that she loves love and like she has said before she is not giving up on it. " Itabidi imekuwa... we ain't giving up on love."

Another fan commented along the same line and Amber said, " siwezi wacha iniue."

Following a quick sweep on her account I realized she had deleted all photos of her and seemingly now ex, Kennedy. Oohh all the cute couples shoot they had done together.

The revelation kind of feels like a stunt as just a few weeks ago, Amber and her now ex-lover Kennedy Rapudo had been flaunting their love on social media.

Amber Ray hooked up with Kennedy Rapudo a few weeks after breaking up with Sierra Leonean lover Kabba.

Amber Ray's new boo claps back at a troll

Amber Ray's new boyfriend, Kennedy got a share of online hate but it seems the businessman knows how to handle himself
Trending
3 months ago

'I pity the man who dates Amber,' Kabba says

Amber's ex boyfriend said bagging Amber was not a price adding that Amber needs to grow up
Trending
3 months ago
WATCH: For the latest videos on entertainment stories