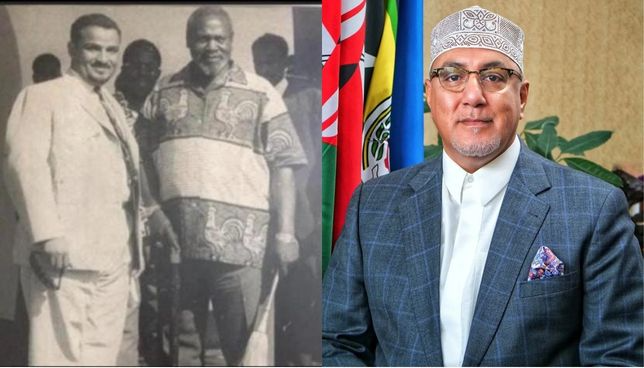 CS Najib Balala pitted against his late brother and former President Jomo Kenyatta. Balala and his family are in mourning

In a statement released via his social media pages, Balala announced that his late brother will be buried on Thursday at 10:00 am according to the traditions of the Muslim religion.

Information given by the CS explains that his late brother is survived by four sons and three daughters.

The late Salim Mohamed was an assistant minister in the ministry of finance and economic planning from 1966 to 1974.

“He is also brother to Hussein Balala (deceased), Talal Balala, Jalal Balala, Abdulnasser Balala, myself, and our 3 sisters.

“The late Sheikh Salim was a nominated Member of Parliament and also served as an Assistant Minister in the Ministry of Finance and Economic Planning from 1966 to 1974 under late President H.E Jomo Kenyatta,” the CS informed.

Balala went on to make a short prayer for his departed brother; "May Allah grant him Jannatul Firdaus. “Inna lillahi wa inna ilayhi raji’un ( Indeed, to God we belong and to God we shall return),”

“It is with great sadness to announce the death of my father Sheikh Salim Mohamed Balala, burial shall be at 10:00 am at Kikowani , prayers shall be at masjid shibu .Innah lilahi wa Innah illahi rajuun.”.

Outgoing Mombasa Governor Ali Hassan Joho also sent a message of condolence to the Balala for the great loss.

“On behalf of the people of Mombasa, I extend our heartfelt condolences to the entire Balala Family and it is our prayer that the Almighty Allah SWT grant him Jannatul Firdaus. Inna Lillahi wa inna ilayhi raji’un (Indeed, to God we belong and to God we shall return.),” Joho wrote.