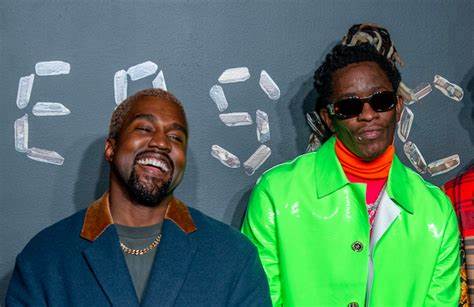 Award-winning rapper Young Thug is still a big deal and making headlines despite being locked up over over RICO charges.

However, it seems the 'City Girls' hitmaker has direct sources with the outside world and incredible WIFI as well.

He he heard Kanye's latest cries and rants with both Gap and Adidas, and well being Young Thug he decided to play Santa.

The incarcerated rap star has decided to go out of his way and help Kanye West actualize his dream of launching worldwide Yeezy stores.

First off 100 acres? 100 acres! Like for real? Someone just has 100 acres of land lying around unused and the way homelessness is a big issue in the USA? Classic.

Excited, Ye began to reveal the news with good friend A$AP Bari before texting his ex-wife Kim Kardashian, in hopes she could work her clemency magic to free the YSL Records leader.

Hopefully, Kim has a magic ward hidden somewhere in her luxurious mansion because our boy Thugga has already been denied bond three times after being named the head of his ongoing Georgia RICO case.

This isn't the first time the 31-year-old has made an appearance from jail.

Just two months ago he still found a way to be at Hot 97's Summer Jam and thank his fans for their support during an uncertain time.

Young Thug sent an audio recording which was played at the concert with a photo of him behind the recording “I just want to say thank you to all of my friends and my family for coming out and supporting us, you know, your support during this time means a lot to us, ya know.” Thug's message said.

Fans were beyond ecstatic upon seeing the message

Young Thug was arrested on the 10th of May in Atlanta on charges of participating in street gang activity and conspiracy to violate the Racketeer Influenced and Corrupt Organizations (RICO) act.

The rapper is being accused of permitting YSL members to kill YFN Lucci while he was in prison in Fulton County.

In the indictment charges two of Thugger's associates revealed that they requested permission from the internationally acclaimed rapper to put a hit on Lucci.

Kim Kardashian tweeted in support for the release of the rapper who was denied bail for the second time
Trending
2 months ago
WATCH: For the latest videos on entertainment stories