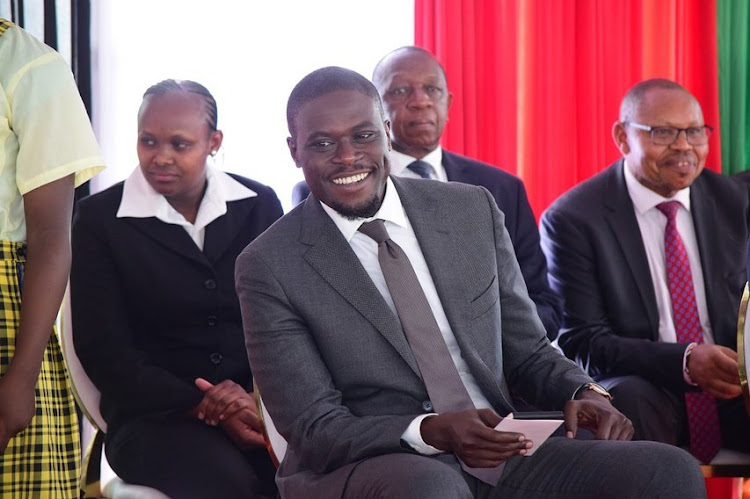 Nairobi governor, Johnson Sakaja, is arguably one of the coolest politicians the country has been blessed with.

This week, a throwback video of him emerged while he was on a brief interview when one of the reporters asked him to sing a verse of one of Nyashinski's songs,

Sakaja without further ado proceeded to freestyle 'Kebs', one of the artistes most popular songs.

Kenyans were largely impressed by the politician's freestyling. Some of those comments are below;

Despite Hon Johnson Sakaja being into politics, it is known that he also showed interest in music, not forgetting he was a rapper while in campus.

He dropped a new gengetone freestyle when rumours spread of his name missing in the University Of Nairobi graduation booklet.

Sakaja and Nyashinski have had very a close friendship, with Sakaja previously saying Nyashinski was an artist that he admired and listened to.

In a past interview, the father of two explained the bromance the two share saying;

“Tulikuwa wasani pamoja. We met back in high school, he was in Nairobi School and I was in Lenana School. He is a very good friend of mine and a great artiste that I deeply admire. He is very talented, and he is the only artiste that performed at my inauguration,” said Sakaja.

The tall dark-skinned leader affirmed the statement above by only allowing Nyashinski to be the only musician performing at his inauguration.

The rapper didn't disappoint and brought Nairobi to a standstill with his fire performance at the swearing-in ceremony something the Nairobi leader noted with praise.

“I was extremely happy that he did, and it was quite an honour. He is a true friend, even outside the political circle, he is someone with whom I interact every now and then,” he added.

Apart from mutual respect for each other, the two comrades even talk about affairs that are unrelated to music.