This will be the second surgery for the little girl who hurt her arm a few weeks ago. 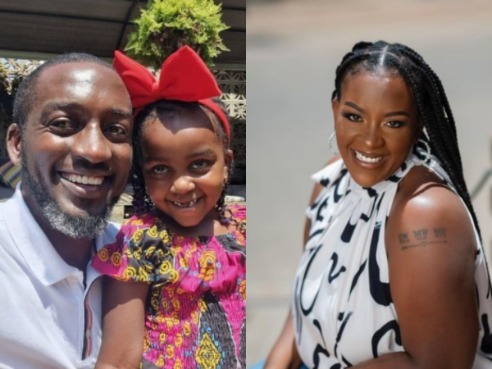 Murugi Munyi with her hubby Zach and daughter Mukenyi. The little girl is set to undergo surgery today.

Kenyan Podcaster Murugi Munyi has shared an update on her daughter's health with a revelation that she will be un undergoing surgery today.

This will be the second surgery for the little girl who hurt her arm a few weeks ago.

Taking to her Insta-stories Munyi revealed that her daughter's cast had been removed but there was a wire that needed to be removed.

"The doctor looked at the x-ray and said that the cast could come off but the process of taking off the cast if you ever had a cast it's a little sour which can't hurt her but because of the sound it makes of course she was scared and she was crying just a bit."

"The cast is off but on Friday we have minor surgery again for them to remove the wire that's in her hand.

"She's gonna be on general anesthesia. Even though the surgery itself is quite minor and would take probably ten to 20 minutes.

The fact that she's asleep in there and under anesthesia is what gives me the creeps but am praying that everything is going to go well.

I can't wait for Friday so we can just be done with all the arm shenanigans."

Munyi says she is proud of how far they have come.

"I am proud of myself for not dying because of anxiety. I am hopeful that everything will go well.

"The last time Zach had traveled was when Mukenyi was in surgery but now he is. I am looking forward to having the wire removed from her hand."

She then proceeded to pen a prayer for her daughter.

"May your hand be upon her surgeon. Allow him to act as an extension of your healing hand,". 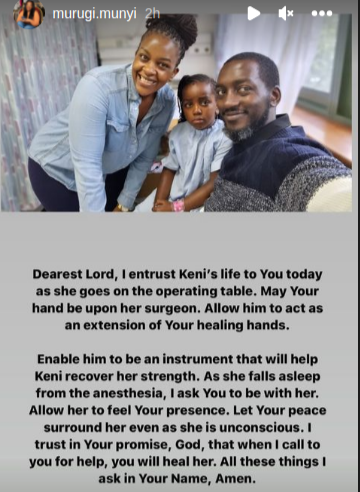