Stay Safe!! How to avoid being mugged in the CBD

Do not handle cash in the open. Be especially careful after withdrawing money from ATMs or M-Pesa agents. 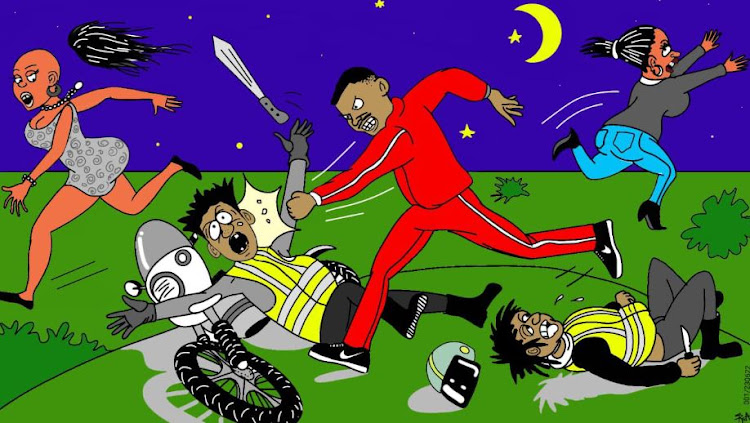 Risk management and security group, SF on Thursday issued an advisory warning Nairobi residents about insecurity in the city.

They gave a few pointers on how to stay safe from perpetrators of stubbing, shooting, and muggings in the Central Business District.

They said citizens should not get distracted, especially by using phones, when out in public and after dark.

“Don’t walk around on your own after dark or in quiet, isolated areas or casually display high-value items like laptops, phones and jewellery. Take valuables out that you do not need,” they said.

When in a car, they cautioned residents to pull the window up before using their phones.

They advise residents to use their phones in densely populated areas.

“Do not handle cash in the open. Be especially careful after withdrawing money from ATMs or M-Pesa agents,” they said.

Instead, they ask that residents be vigilant when in public and employ caution when using matatus and boda bodas.

“Listen for motorcycle engines, and be more vigilant in the vicinity of boda bodas as they are used by criminals to attack, surveil and get away fast from crime scenes.

If in a café or restaurant keep valuable items out of sight to avoid an opportunist quick grab.” they said.

They urged residents to make use of safe boxes and lock up valuables instead of carrying them around and familiarise themselves with hotel staff, security guards, and other personnel in new environs.

“Walk in groups of at least two and familiarise yourself with roads and routes. When driving, use your mirrors regularly to spot any suspicious boda bodas that might be tailing you. Vary routes to work to avoid a set pattern,” they said.

They advise residents to always carry a hard copy of emergency contact numbers in case one’s phone is stolen.

“If unsure when travelling, seek advice from security responders on what to look out for to avoid falling victim to the criminals,” they said.

List: How to stay secure around campus hot spots

High level of insecurity around Kenyan campus’ has led to the deaths of a couple of students.
Entertainment
7 months ago

Chimano opens up on insecurities, music and his love life

His 7-track Ep, releasing week before Feb 26, is about his sexuality.
Entertainment
10 months ago