Jowie has also said it's possible that many other people accessed the deceased house on that night. 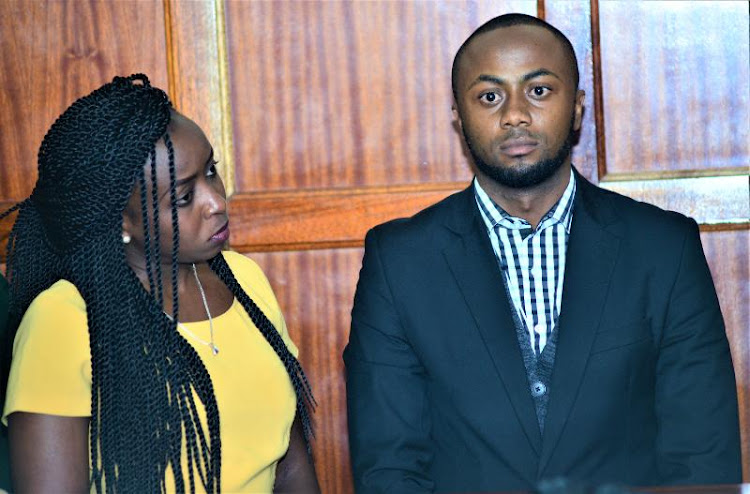 the-star.co.ke Maribe and Jowie during a court hearing. His lawyer has asked that the court acquits him of Monicah Kimani's murder.

Jowie Irungu has denied killing businesswoman Monica Kimani saying she might have been killed by an unknown man who was at her house that night.

Jowie was charged in 2018 alongside Jacque Maribe.

After hearing testimonies from 35 witnesses the court is expected to rule whether they have a case to answer or not.

In his submissions filed in court, Jowie through lawyer Hassan Nandwa said an officer had told the court that he found the DNA of an unknown male in Monica’s house.

Jowie said the officer from the government chemist said he conducted DNA analysis on the items collected from Monica's house.

They included samples from glasses, fridge, clothes, leftover food, and gloves found in the bathroom and his conclusion was Jowie's DNA was not present on any of those items.

“In his report, he made six conclusions which in part said the empty tusker can contain DNA of an unknown male and the strapping used to cover Monica’s mount contained her DNA and that of an unknown male who is not him,” Jowie said.

“It is this unknown person whose DNA was on the strapping that killed Monica, it's evident from the government chemist that I was not in Monica’s house on that night,” he said.

On the issue of his short having a drop of blood, Jowie said the blood was dropped by someone because it's bigger on the front side than the rear side further alleging that when the short was recovered they did not have blood.

Jowie has also poked holes in this evidence saying if he was wearing a Kanzu how come there were no blood stains on the Kanzu but were found on his shorts?

He also told the court that he had no apparent reason or motive to make him kill Monica.

“They were friends and enjoyed good healthy relations with no toxic interactions as it comes out in the testimony,” the submissions read.

Jowie has also said it's possible that many other people accessed the deceased house on that night.

He also has another theory of who killed Monica saying it might have been a Sudanese she was cohabiting with.

He claims that the man who is presumed to have access to the house at will yet no evidence was tendered in the court to show that he was not in Kenya on that day.

He also said Monica may have fought with the said Sudanese man over a text message.

He said the prosecution evidence produced in court has failed to fulfill the criteria of a prima facie case against him since it cannot link him to the killing of Monica.

“We plead with this honourable court to find that Jowie has no case to answer and consequently acquit him,” Jowie's lawyer said.

Maribe is charged alongside Jowie Irungu with the murder of Kimani.
Trending
8 months ago

Jowie Irungu is the prime suspect in Monica Kimani's death that took place on September 19, 2018
Lifestyle
8 months ago