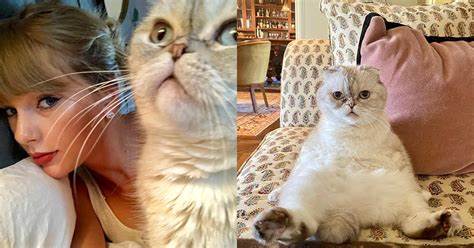 Another day to be reminded that this world is not our home.

Taylor Swift's cat, Olivia Benson has been named the third richest pet in the world according to a new report from "All About Cats" with a net worth of $97m.

Yep, you read that correctly.

I honestly don't even want to convert those millions into Kenyan shillings because wueh! A furry animal that can't speak!

And mind you at 97 million dollars it is still not the richest pet in the world!

The ranking of the world’s richest pets was compiled using the Instagram analytics of each cat influencer. These included most followers, likes, engagement rates, and how much they could make per Instagram post.

While a majority of the world’s richest pets are social media influencers, Olivia is a bigger deal rising above the norm.

Taylor's furry friend has made a fortune outside of the world of Instagram influencing.

“The Scottish Fold earned her fortune starring alongside her owner in several music videos, has crafted her own merchandise line, and has had cameos in many big-budget ads, including for the likes of Diet Coke and Ned Sneakers,” the report said.

But I mean it is Olivia Benson!

Taylor borrowed the name from Mariska Hagitay’s character in Law & Order: Special Victims Unit – and it seems the cat fully embodies its namesake's character to some extent.

Olivia has starred alongside Taylor Swift in several commercials for DirectTV, Diet Coke, and AT&T. She’s also made cameos in Swift’s music videos for her tracks “Me!” and “Blank Space”.

It’s Taylor Swift’s cat’s world and we’re all just living in it.

Olivia seems to be the Kim Kardashian of the family as Taylor's other two cats, Meredith Grey and Benjamin Button, did not make the Forbes-style list.

At number one on the ranking of the world’s richest pets is a German Shepherd dog named Gunther IV, who is owned by Italian media company Gunther Corporation and worth $500m.

Coming in at number two is another cat named Nala Cat with a strong raking of 100 million dollars. Nala is also a big wig on socials with a 4.4m following on Instagram.

Oprah Winfrey’s pet dogs Sadie, Sunny, Lauren, Layla, and Luke are all ranked at number four, with a collective $30m.

Pontiac, the late Betty White’s Golden Retriever, is the seventh richest pet in the world with a $5m net worth.

Obinna: I want to be Sonko's dog