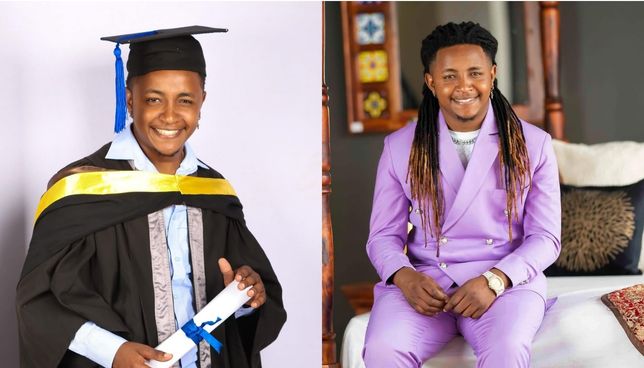 The 22-year-old took to his Instagram stories to share one of his new year's resolutions with his fans.

Pluto started by narrating how he is easily influenced. Noting that even when he doesn't plan on drinking his dotting fans always have a way of getting him drunk.

Ata kama sikuwa niliwe nalewa (You know sometimes I go to a club and I come across one of my cool fans and they're like my guy asks for anything you want, I'm paying.

Even though I was not planning on drinking I find myself drunk.)," Pluto said.

Highlighting that, that is one of the reasons why he drinks so much.

The content creator went on to reveal that for 2023 he was planning on saying bye-bye to alcohol thus pleading with his fans to help him achieve his goal.

Pluto went on to ask them to no longer offer him alcohol even when they see him out clubbing.

"Ukiniona this time niitishie tu juice ama maji (if you see me out from now on and want to treat me just order for me juice or water please,)" Noted the father of two.

He finished off by confirming his decision to quit alcohol.

"My time as an alcohol drinker has come to an end." Wrote Pluto.

He also shared a picture of him and a friend at a nightclub along Thika super highway and on the table, only bottles of soda and water could be seen.

He, however, did not cite reasons for putting the bottle down.

But hey with a newborn baby girl, we can only imagine he just wants to be the best father he can be.

A few days ago, Pluto noted that another one of his 2023 goals was to help grow talent among Kenyan youths. This was after he attended a talent event in Nyandarua.