Kalonzo's son was involved in a grisly accident yesterday morning 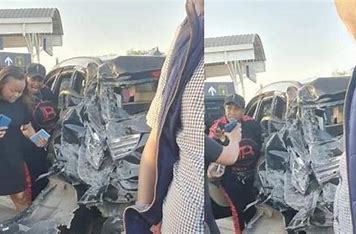 Following the grisly accident that Kalonzo Musyoka’s son was involved in on Saturday at the Jomo Kenyatta International Airport (JKIA) screening area his elder brother and Kalonzo's spokesperson have released statements updating the public on his condition.

According to Ms Paloma Gatabaki, the spokesperson of the Stephen Kalonzo Musyoka (SKM) command centre and Kalonzo's other son Kennedy, who is a EALA lawmaker Kevin is in stable condition and responding well to treatment.

In a statement, Ms Gatabaki explained that Kevin Musyoka, had been involved in an accident but was responding well to treatment at a hospital in Nairobi.

“The family of Kalonzo Musyoka would like to thank all who have called and texted concerning the accident at JKIA involving Kevin.

The first responders to the scene were extremely professional and diligent and we thank God for them,” a statement from Kalonzo's team read.

“My brother Kelvin Musyoka is in stable condition after being involved in an accident at the Jomo Kenyatta International Airport (JKIA),” said the lawmaker who is serving his second term in EALA.

On the morning of Saturday, January 21, 2023, at around 6 am reports streamed in that highlighted that a red lorry had rammed into a Sports Utility Vehicle that had occupants who included Kalonzo’s son.

The driver of the lorry fled from the scene immediately after the accident. Photos of the scene of the accident made rounds on various social media sites.

In some of the photos, Machakos Governor, Wavinya Ndeti was seen standing beside the private motor vehicle which was involved in the accident.

Governor Ndeti was reportedly furious the driver of the lorry had managed to escape and had avoided arrest till now.

However, it has been reported that police officers in the city have launched a manhunt for the driver who is still at large.

Anerlisa Muigai and her mom Tabitha Karanja have spoken about how their late kin, Tecra Muigai changed months
Trending
3 weeks ago

Two-time Oscar nominee Renner is best known for his role as Clint Barton/Hawkeye in the Marvel cinematic universe, starring in several Avengers films
Entertainment
4 weeks ago