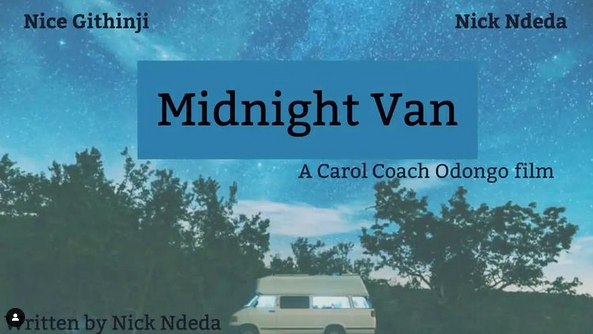 The much anticipated film 'Midnight Van' will make its debut in June ahead of the general elections.

The film directed by Carol Odongo explores the culpability of the media when it comes to post election violence told through the eyes of two news anchors.

In a statement, Carol said "I want to highlight the irony of those in high positions thinking they are “safe” in their “high towers”, not realizing that those towers they build can imprison them and lead to their destruction."

She adds that the power of this story lies in how only two characters can make us feel the pulse of a whole nation.

The film was written by actor and radio personality Nick Ndeda who says that the film is a story about consequences and the effect they have on the human conscience.

"The overall aim of this story is to serve as a reminder that all our actions,subconscious or otherwise, all have direct and very real consequences."

Actress Nice Githinji said the goal is to impact as many Kenyans as possible.

"I see a story with a long shelf life, one that will cut across borders by speaking a language that all of Africa understands."

The film Stars Nice Githinji and Nick Ndeda. It will be translated into nine Kenyan languages and the production has consequently borrowed voices of renowned actors and voice actors like Wakio Mzenge (My two wives) and Musa Chachirato, who among others, will be in the dubbing team.

"We hope that the person deep in Pokot, El Molo or even Lamu will watch this film and realise that the power is within us. For a change, this film will be about everything BUT the politicians because they can preach their gospel all they want, but we control how to react." Nice Githinji added

Why Marvel should recast T'challa in black panther 2