Was it wrong for Chameleone and bro Weasel to kiss on the lips?

Chameleone and Weasel are blood brothers and also Uganda singers 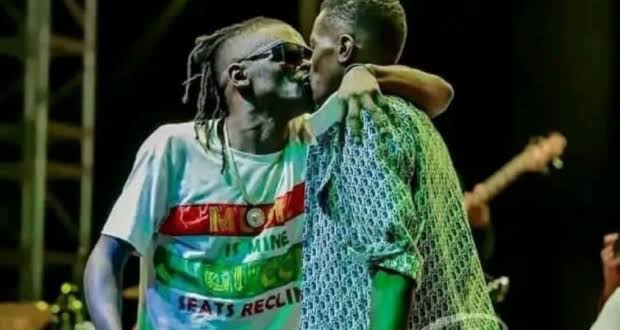 The two have left people talking after they shared a kiss on the lips after their Monday show at a popular hotel in Bujumbura, Burundi.

In the photo, Weasel is seen wrapping his hand around Chameleone's neck as the two kiss.

Weasel later shared the photo on social media and captioned;

The photo has since elicited mixed reactions. But this isn't the first time the two brothers have kissed in public. In 2018 they also locked lips at a party.

What most family members have embraced is cheek kissing which is termed as a ritual or greeting or a social gesture.

According to Wikipedia "Cheek kissing is acceptable between parents and children, family members (though not often two adult males), couples, two female friends or a male friend and a female friend."

"Cheek kissing between two men who are not a couple is unusual but socially acceptable if both men are happy to take part."

Many people online commented about the kiss. Check out the reactions below:

Rukia Kiguddu: Like rily I cnt biliv it this is awesome we love them al.

Isaac Kibet: @Even if you say anything nasty concerning our legend @Jose mayanja you won't change my /our Love for him as far as music industry is concerned, so look for another thing better than this to use to ruin his name

Zahara Nakimuli: Brotherhood, we even kiss our babies, so wat.

Page David: You people it's your life keep it up.

Kyalimpa Tracie: Omg 😱😳😳, what was that.

HENRY WESONGA This is not good love from Kenya 🇰🇪

Agnes Rwakatale please guys we are Africa stop copying everything not good at all even if u are brothers there is another way u. can do it what's wrong with Ugandan nowadays u really wonder.