The final episodes of TV soap opera Neighbours have been aired 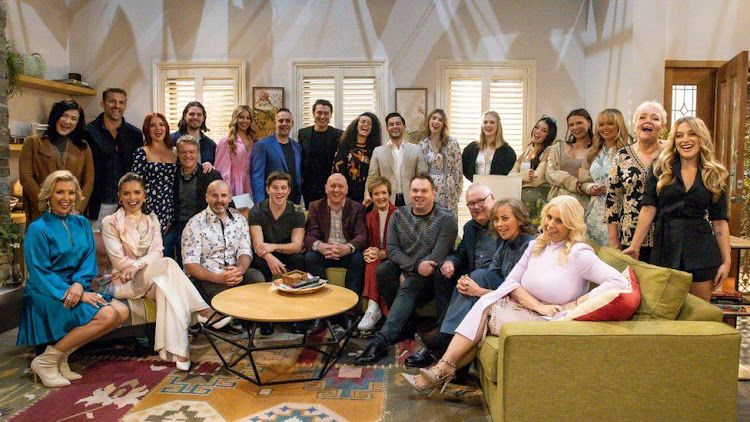 The final episodes of TV soap opera Neighbours have been aired in Australia.

Hundreds of fans gathered to watch on a big screen in Melbourne - the city where the show is set and produced.

In the UK, where Neighbours found most success, the finale will be broadcast on Friday evening on Channel 5.

But while we won't be giving away plot spoilers for the UK audience, the show's producers had been clear they wouldn't end on scenes of destruction and devastation.

Instead, executive producer Jason Herbison told the BBC the aim was to give a "group hug" to fans who had grown up with the show.

In Melbourne's Federation Square, hardcore fans turned out to watch the final slice of life on Ramsay Street, in the fictional Melbourne suburb of Erinsborough (famously, nearly an anagram of Neighbours).

The show's demise after almost 9,000 episodes comes amid dwindling ratings. In Australia, Neighbours has struggled to attract 100,000 daily viewers on a subsidiary channel of Network Ten.

Even in the UK, where in the late 1980s, 20 million people regularly tuned in - more than a third of the population - viewing figures are now closer to one million.

In March, Channel 5 announced it was dropping the show - leaving a funding gap because the British network was a key broadcast partner in the series.

Stefan Dennis, who has played Paul Robinson since the show started in 1985, told the BBC that it was going to take a while to "say goodbye to Paul".

"He's not just someone I come to work and play for a few hours, and then go home," he said.

"You're talking about a character I have grown up with, matured with, developed with for nearly 40 years.

"I don't know how I am going to say goodbye. I'd like to think I'm going to hang the suit up and walk away, but I think it'll take a bit of a while to shake off."

Minogue, who played Charlene Robinson from 1986 to 1988, set social media alight when she posted pictures of her and on-screen husband Jason Donovan, back on the street.

The 1987 episode of the couple's wedding is still perhaps the soap's most iconic moment.

This week it was revealed another former Neighbour turned Hollywood star, Margot Robbie, had returned for the farewell.

The show has lately featured more diverse characters and storylines, amid questions over how well it really reflected modern Australia. It had the first same-sex marriage on Australian TV.

But it also had its controversies - recently a number of actors came forward with racism allegations. Production company Fremantle Media promised a review.

On the finals days of filming, however, the set was buzzing - filled with faces that have been with audiences for decades.

Ian Smith, who played Harold Bishop, came back after a seven-year hiatus. He said the return of former castmates had created the "best, warmest, funniest reunion".

Showing the BBC around his former stomping ground, Harold's Café, he expressed confidence his cardigan-wearing "fuddy-duddy" character would live on.

"Over the seven or eight years I've been away, I've been made aware that he is a bit of a force, still, in this world," he said.

Smith - who also wrote episodes but never those including his own character - said the show's success in the UK partly was down to the portrayal of a different way of life.

"We always tried to show we were wallowing in the sun, getting a suntan. In truth half the time we were being put in light cotton shirts and freezing to death."

His sentiments are echoed by British expat Gemma Clement, who moved from Manchester to Melbourne 12 years ago - a shift she says was prompted by watching the soap.

"Because of Neighbours, it's where I ended up. It always looked so sunny and nice and the lifestyle is great. Not quite like on Neighbours but it's still awesome," she told the BBC.

A fixture of childhood

Simon Atkinson, on the set of Neighbours

Like many other British kids in the '80s and '90s, I grew up watching Neighbours - sometimes twice a day.

I clearly remember the primary school assembly going wild, when Mr Debenham, instead of playing the usual hymns, hammered out the familiar theme tune on his piano.

And the only thing which truly sustained a pen pal relationship with my cousin in Australia was getting inside info on Ramsay Street. At the time, the show was at least six months ahead of what we were seeing on the BBC.

Once my interest in the show tailed off, so did our correspondence. Sorry, Amanda.

As a journalist I've been lucky to visit some fascinating places and meet extraordinary people globally. But a recent trip to the Neighbours set was a particularly memorable day - seeing the doorway of Lassiters, inside the Waterhole, and chatting with the actors who play Paul and Harold.

It was also hard not to feel sympathy for the cast and, especially, the crew who stayed passionate about the soap until the end.

Director Phil said Kate's self confidence is on another level and she's a courageous woman.
Entertainment
2 weeks ago