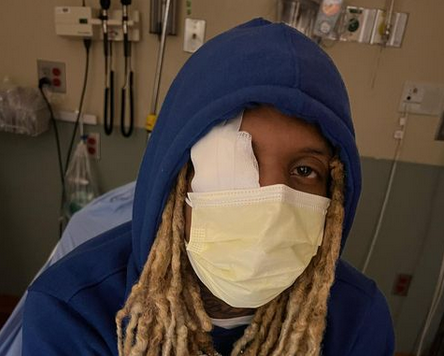 Rapper Lil Durk says he is taking time off to recover after being injured by a pyrotechnic at the Lollapalooza festival in Chicago.

The 29-year-old was playing to a crowd of thousands when a smoke bomb went off in his face on Saturday night.

In fan-captured video, he was seen staggering backwards from the device and wiping his eyes with a t-shirt.

Although he finished the performance, Lil Durk later posted a photo from hospital with a patch over one eye.

"Due to the incident that happened at Lollapalooza in Chicago on stage, I'ma take a break & focus on my health," he captioned the photo on Instagram.

"I finished my performance yesterday for my fans. Appreciate y'all."

Lil Durk has more than 20 US tour dates scheduled before the end of the year. It is not yet clear how many of those concerts will be affected.

Lollapalooza has not commented on the incident, which came as Lil Durk was performing the track Back In Blood during his early evening set.

"Woah, woah, you alright, bro?" his DJ could be heard saying. "That one came a little close. It shot straight up."

Lil Durk took a few moments to collect himself before continuing his performance. "No more smoke, let's do it," he told the packed crowd, according to Page Six.

The drill star scored his second US number one in March, with his seventh studio album 7220. The record contained his biggest hit to date, Broadway Girls, with country singer Morgan Wallen.

Their collaboration raised a few eyebrows, as Wallen had been embroiled in controversy after a video emerged showing him yelling the N-word outside his home in Nashville.

The singer was temporarily suspended by his record label and banned by several country music TV and radio stations.

Lil Durk later defended Wallen, saying he was "not a racist" and had "just made a mistake".

"We had a long talk. He had his public situation... I vouch for him and he good," the rapper added.