Aaron Carter's body was found at his California home on Saturday. No cause of death has yet been disclosed 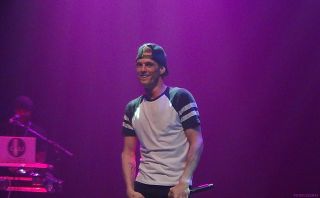 Backstreet Boys singer Nick Carter has led tributes after the death of his younger brother and fellow star Aaron.

In a social media post Nick, 42, said the pair had a "complicated relationship" but his love had "never ever faded" for Aaron, who was 34.

Nick's band also dedicated a song to the younger Carter during a concert in London on Sunday evening.

Aaron's body was found at his California home on Saturday. No cause of death has yet been disclosed.

A statement from the late singer's team that day confirmed the news, promising more information when it was available.

US media reported that police found the lifeless body of the I Want Candy singer in the bath.

Carter, a former child star, sold millions of albums, having gained fame as an opening act for the Backstreet Boys in the late 1990s.

His brother Nick, a member of the American boy band, wrote online: "I will miss my brother more than anyone will ever know."

His post acknowledged that their brotherhood had not been without its tensions, which culminated in the elder Carter taking out a restraining order against his sibling in 2019.

Footage shared online showed Kevin Richardson, another member of the Backstreet Boys, acknowledging the news during a performance which went ahead on Sunday night.

He told a crowd at London's The 02 venue that the band had "heavy hearts because we lost one of our family members yesterday".

In the clip - posted by reviews website All That Dazzles - Richardson thanked fans for their support.

A silent Nick Carter was comforted by his bandmates, before the group went on to dedicate a performance of their song Breathe to their former touring companion.

Other stars - including Paris Hilton, Tyler Hilton and Hilary Duff, and bands New Kids on the Block and *NSYNC - have posted their own messages remembering the singer.

He was found dead in his bath at his home in Lancaster, California
Entertainment
3 weeks ago

Takeoff from rap group Migos has reportedly been shot dead. The hip hop rapper was allegedly gunned down at Billiard
Trending
4 weeks ago