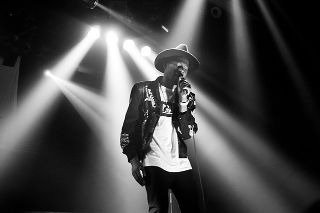 American rapper Theophilus London, who had been missing for several months, has been found safe, his family said.

In an Instagram post on Wednesday night, London's cousin said the rapper was located "safe and well".

London's family had filed a missing person's report with the Los Angeles Police Department, and had said they believed someone last spoke to the musician in July.

The family did not release further details on where he was found or how.

In his post, London's cousin Mikhail Noel shared a photo of the 35-year-old rapper and thanked people for their help in finding him.

"At this time the family would love prayers and privacy," Mr Noel wrote.

"It's refreshing and rewarding to have such a strong support system of family and friends," he added.

The LAPD first reported London's disappearance in a press release on 28 December, saying the rapper was last seen in the "Skid Row" area of Los Angeles around noon local time on 15 October.

They added his family had lost complete contact with him that month, and that he had not been seen since.

The BBC has reached out to the LAPD to confirm that London has been located safe, but has not yet received a response.

His friends and family attempted to reach out to him in a statement released last week through the record label collective Secretly Group, and appealed to the public to help find him.

"Theo, your dad loves you, son. We miss you. And all your friends and relatives are searching for you. Wherever you are, send us some signal. No matter what we will come get you son," London's father, Lary Moses London, wrote in the statement.

London was born in Trinidad and Tobago, and later raised in Brooklyn, New York. He broke through in 2009 with his single "Humdrum Town", and went on to collaborate with Kanye West and Tame Impala.

In 2016, London was nominated for a Grammy in the best rap performance category for appearing alongside Paul McCartney on West's "All Day".