Many households today are made up of single parents.

Celebrities ex-hubbies shy away from the limelight but they are always caught. The best thing about most is that they had children in their previous marriages and they fight to be in their lives.

Here is a list of celebrity ex-husbands you know of and their role as fathers:

She tied the knot with her baby daddy on that day, in a glitzy wedding ceremony that saw top public figures in attendance.

Several years later, Lilian Muli and her estranged hubby parted ways and she moved out with their 6 years old son to start a new life.

He courted for five months and then got married the same year. Everybody said they were rushing into it but they were in love. Burale said he should have listened.  They dated, courted, paid dowry and got married all within five months. Both parents were okay with it.

Burale and ex-wife have a daughter together. Prezzo wed Daisy at an illustrious wedding ceremony that made headlines. It did not take long before their marriage turned into a bed of sharp thorny roses.

Daisy realized soon enough that the marriage was not going to work at ALL. She filed for divorce. It was a bitter battle that saw Daisy get full custody of their child.

We all loved this couple and before we knew it they were over and done with. Betty Kyalo and Dennis Okari were every Kenya’s dream couple.

Their marriage ended after cheating allegations. The two have a daughter together.

After the grand proposal, Sharon Mundia and Lonina’s wedding was to die for on the beach.

6 months later, the two divorced after cheating allegations. The two have a child together.

His comments on his social media pages started raising eyebrows. The next thing we know they are divorced. Their wedding was also a very glamorous one with high esteemed guests.

JB Masanduku married Tina Kagia, their divorce was one emotional one. Every time Tina does an interview on her marriage, she sheds tears. They broke up after his drinking problem. The two have 3 children. 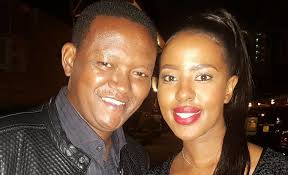 Now married to Lillian, he was the husband to Josephine Thita who have 3 children. The two got married in 2000 but separated in 2012 when Josephine went to Australia with her children.

Despite all the celebrity fathers being divorced, they all play an active role in their children’s lives.

Betty Kyalo is the queen of clap-backs, read how she silences rude fan

DNG opens up about a woman he once dated! ‘Never let anyone break your spirit…’

‘Who is he?’ Clueless Americans ask after Davido is introduced

‘Losing my child really shook my faith’ Size 8 opens up

Timeless Noel is giving his peers a run for their money...

‘Shot your shot’ Akothee gets flirtatious as she invites suitors