They’ve been the picture of wedded bliss after tying the knot in March.

And Idris Elba’s new wife Sabrina Dhowre oozed glamour in a red silk shirt dress on Wednesday, as the couple led stars at the Cartier and British Vogue Darlings Dinner.

The American actress, 29, was a vision of beauty as she arrived with her new husband, 46, for the bash in London’s New Bond Street. 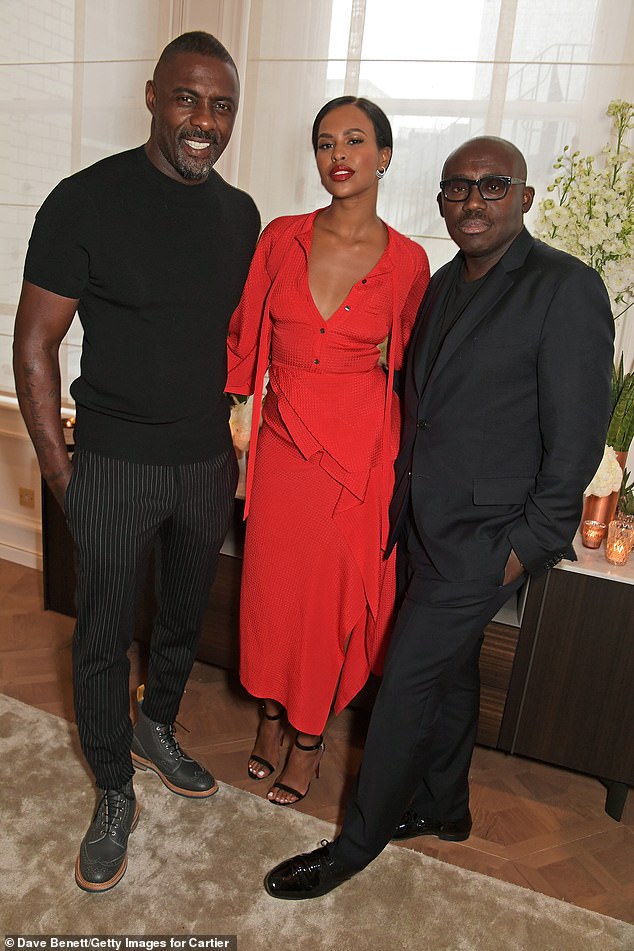 Sabrina’s bright red silk dress added a pop of colour to the celebration, with a busty fitted top flowing into a loose skirt with frilled detailing.

The former Miss Vancouver star arrived with the Luther star mere weeks after they married in a lavish Marrakesh ceremony.

The bash was held to celebrate the launch of  ‘Vogue Darlings’ and Cartier’s new Clash collection.

The event also comes as the couple graced the cover of British Vogue’s Bridal Issue, offering yet another glimpse at their incredible nuptials.

Speaking of his decision to wed Sabrina, Luther star Idris admitted: ‘We’ve been literally inseparable since we met. Inseparable.

‘You know, I’m 47 this year, been married and lived a full life before I even met Sabrina. It wasn’t something that I wanted to do, get married again. But…’

Idris then detailed how the former beauty queen had changed his outlook on marriage, saying: ‘Sabrina has deepened friendships with people I’ve known longer than [her], nurturing the best side of me to make me connect to my friends more.’

Singer Liam Payne, 25, also made for a dapper arrival as he arrived for the bash, opting for a simple monochrome suit as he posed up a storm with stars in attendance.

The outing came after Liam candidly revealed his time as a member of boyband One Direction was ‘a little bit toxic,’ in an interview with Men’s Health Australia.

‘It’s almost like putting the Disney costume on before you step up on stage and underneath the Disney costume I was p***ed quite a lot of the time because there was no other way to get your head around what was going on, I mean it was fun,’ he said.

‘We had an absolute blast but there were certain parts of it where it just got a little bit toxic, it’s difficult when you have the level of fame that we had in the band.’

Elba to Tom Hanks, Celebrities who have tested positive for Corona Virus

‘I have been isolated, ‘ Idris Elba says after testing positive for Covid 19

He sure is: Idris Elba named People’s 2018 Sexiest Man Alive

‘They Only Had Eyes For Each Other’: Madonna, 58, Spotted ‘Smooching’ Idris Elba, 44, At Party