They recently welcomed their fourth child together.

Yet Kim Kardashian and Kanye West ensured they were still able to enjoy some quality time together as they were spotted heading to celebrity hotspot Giorgio Baldi in Santa Monica on Thursday.

Two weeks after their son Psalm was born via surrogacy, Kim, 38, showed off her amazingly tiny waistline in a skintight outfit. 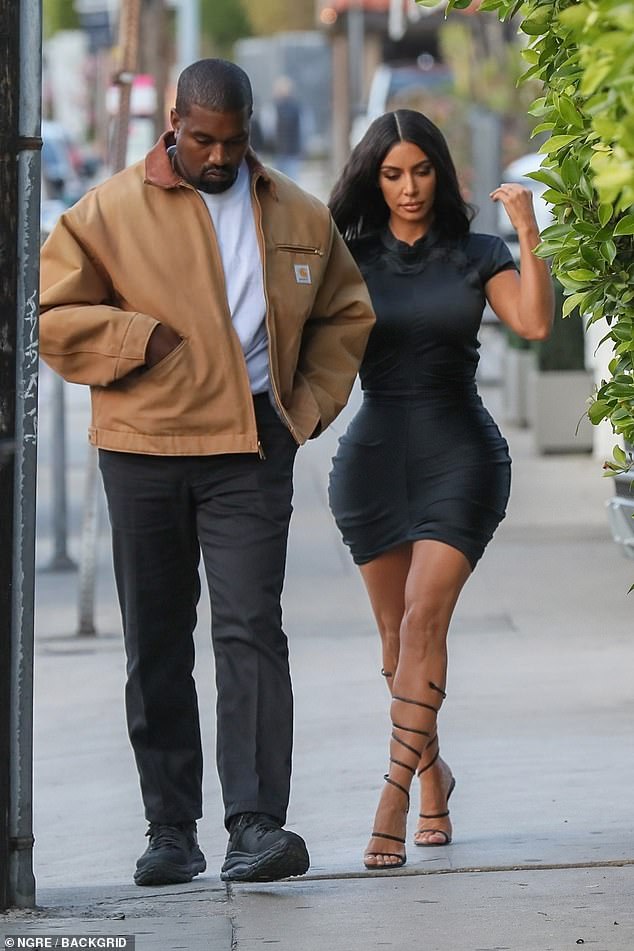 Kim dazzled in a slinky black mini-dress with a hem cut off at mid-thigh to show off her curvaceous legs as she stepped out for her night on the town.

Her chic ensemble featured short sleeves and perfectly matched her sky-high stilettos, which featured straps going up almost to the knee.

The sister of Kourtney and Khloe Kardashian wore her signature wavy dark hair down and accentuated her unmistakable features with makeup.

Meanwhile, her 41-year-old third husband proved his credentials as a fashion icon once again with his casual yet fashionable ensemble.

The rapper hunk was decked out in the brown edition of Carhartt’s Duck Detroit Blanket-Lined jacket, which retails online for $74.99 or $79.99 depending on size.

He threw the wrap over a simple white tee that elegantly clashed against his charcoal pants and glinting black pair of sneakers.

Kanye, who married Kim in a lavish Florentine ceremony back in 2014, could be seen gallantly opening the door of their black Lamborghini for his wife.

He took the driver’s seat as the two of them headed away from the swanky Santa Monica Italian restaurant, which opened in 1995.

The outing came days after the pair announced that their fourth baby was called Psalm.

The newborn is Kim and Kanye’s fourth child overall and their second to be born after surrogacy, after one-year-old daughter Chicago last January.

Kim gave birth to the couple’s firstborn child, a daughter called North, in 2013 and brought their son Saint into the world in 2015.