He is by far the most private of all the Kardashians and Jenners.

But on Monday the reclusive Rob Kardashian, 32, shared a cute photo on Twitter of his two-year-old daughter Dream cosying up next to her Uncle Kanye West. 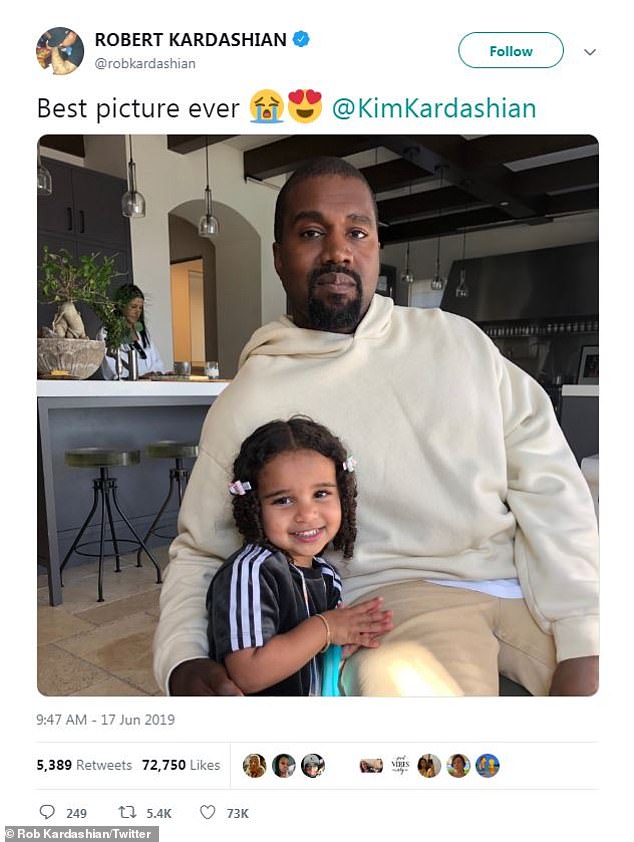 The social media queen responded to her brother, with an enthusiastic ‘#UncleYe.’

In the snap, Dream wore a black Adidas sweatsuit and pink bows in her hair.

But what stood out the most was that adorable smile she flashed as she leaned in to her Uncle Ye’s lap.

With his right arm around the precious little girl, the superstar rapper stared directly into the camera dressed in a beige ensemble that included a hoodie.

The photo was likely taken during a Father’s Day celebration on Sunday.

Rob also shared a tweet that said: ‘Happy Father’s Day to me,’ along with a sweet snap of himself cradling Dream when she was just a baby.

The clothing creator also got a shout-out from Caitlyn Jenner, who posted a heartfelt Father’s Day post ‘to all the dads in my life,’ which also included West and sons Burt, Brandon and Brody, along with Kourtney Kardashian’s ex-Scott Disick and Kylie Jenner’s beau Travis Scott.

Kim K shared a Father’s Day tribute by posting a series photos of her husband walking with their two eldest children, North and Saint.

‘Happy Father’s Day! You are the best daddy to our kids!!! We love you so much!’ she gushed in the caption.

Kim and sister Kourtney also took time to pay tribute to their late father Robert Kardashian by sharing throwback snaps of themselves with their dad.

All the fatherly love comes as Rob and ex-Blac Chyna are in the midst of a war of words over Dream’s appearances on reality television.

Rob reportedly had his lawyer tell Chyna that Dream cannot appear in her upcoming reality show, The Real Blac Chyna, without the father’s consent.

The former couple agreed to share joint custody in September of 2017, following their breakup after a whirlwind romance that included claims of abuse from both parties.