Fresh off the release of his latest film, The Secret Life of Pets 2, which has already made over $100 million at the box office, Kevin Hart deserved some downtime.

The 39-year-old comedian is currently enjoying a vacation in Thailand with his wife Eniko, 34, and friends.

He has been sharing snaps from his tropical trip, which has included nights of partying, mornings in the gym and days filled with relaxing and exploring, to Instagram, since Monday. 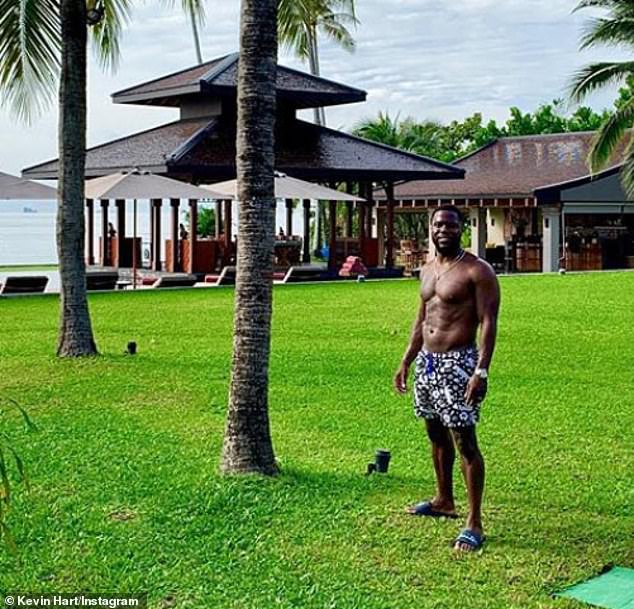 The actor showed off his abs in a photo of him posing in swim trunks next to palm trees with the ocean in the distance.

Before the duo and their friends went out for the day’s activities, the Night School actor hit the gym and playfully called out friends on the trip for partying the night before but being absent from their planned workout.

‘You lazy b****, he was supposed to get up, I knew he wouldn’t,’ he said. ‘It’s funny because you can party…but don’t nobody want to get up and grind.’

‘I’m gonna do both. I’m gonna party and I’m gonna get up and grind.’

His wife, model Eniko, has also taken to the social media platform to chronicle their tropical vacation.

The mom of one shared snaps sitting poolside and hanging with a friend on floaties in the pool.

She wore a chic green one-piece swimsuit while singing along to the music.

In another, she sat on the front of a boat and toasted the trip over beers with a female friend.

The group along for the trip has been keeping their days busy.

In pictures posted to Kevin’s Instagram, he is seen along with two male friends hanging onto the side of a small cart.

Also on Monday the group ventured to Thailand’s well-known Monkey Island and documented the journey in videos. They found a family of 40-50 monkeys that were on shore and in the water.

In one, the father of three can be heard saying ‘Be careful they don’t jump in this damn boat.’

Just days after his horrific accident, Kevin Hart sued by woman he cheated on wife with

‘He still loves me,’ Akothee insinuates reunion with baby daddy

‘Don’t you ever leave me solo,’ Tanasha begs Diamond

‘Keep that one person that can stomach you,’ – Bien Aime

Diamond reveals that he makes most of his money from Kenyans

‘It was a long holiday,’ How Kamene Goro caught her husband...

Diana addresses the story behind her drama with Bahati’s baby mama, Yvette

Bridget Achieng takes a break from work after being hospitalized