Is Anerlisa Muigai spilling the beans on her baby? (PHOTO EVIDENCE) 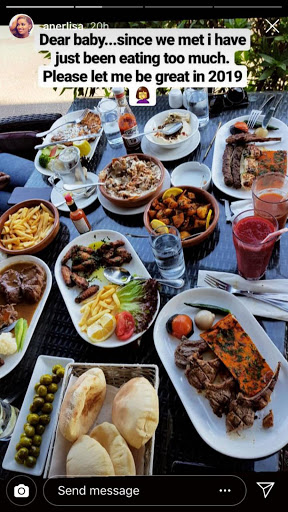 WhatsApp Image 2019-01-02 at 11.31.09
Anerlisa Muigai and Ben Pol have been making headlines with their public display of love all over social media.

It all started after she posted a picture of the two of them looking a bit too cozy about a month ago during his club tour in Kenya.

Fans have been asking her whether she is pregnant because of the recent photos. Anerlisa has been shying off from posting pictures on her social media. Most of the photos Anerlisa has been posting are all passport selfies and according to social media, that means you are hiding a pregnancy.

Well, during her vacay in Dubai, Ben Pol has been making her happy showing her what love means and from the look of things she is head over heels in love with the Tanzanian star.

dear baby...since we met I have just been eating too much. please let me be great in 2019

Most if not all pregnant women always say they are eating for two, could this be Anerlisa confessing that she has been feeding her baby?

Last year she announced she has plans to start a family in 2019, so this could be step number two after getting into a relationship with Ben Pol.