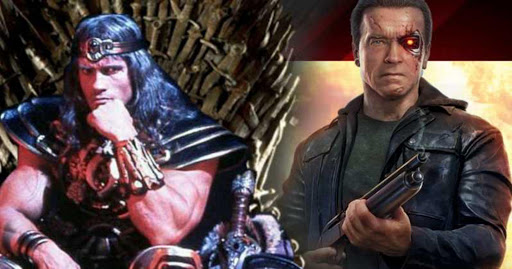 Arnold Schwarzenegger was shockingly drop-kicked from behind while admiring athletes at his sports festival in South Africa.

The 'Terminator' star was filming an athlete jump rope while in a gymnasium at the Arnold Sports Festival at the Sandton Convention Centre, when a stranger jump-kicked him from behind.

Fortunately and perhaps unsurprisingly, despite being 71-years-old , Schwarzenegger was unfazed, writing on Twitter afterwards: 'Thanks for your concerns, but there is nothing to worry about.

'I thought I was just jostled by the crowd, which happens a lot. I only realized I was kicked when I saw the video like all of you. I’m just glad the idiot didn’t interrupt my Snapchat.'

Moments before, the attacker approaches Schwarzenegger while waving, but a member of bodybuilding legend's security team apprehends him.

And as the former California governor comments on how fast the jump ropers are going, the man rushes behind him and launches into his kick.

The assailant throws himself into the air and kicks the back of the Hollywood legend, sending him flying forward into the cameraman and others watching.

The attacker is immediately rushed by security personnel and taken from the scene as others rush to help ensure Schwarzenegger has not been injured.

People gasp and a child can be heard sounding distressed in the background as an adult tries to reassure the youngster.

Bizarrely someone shouting, 'Help me, I need a Lamborghini,' can be heard in the aftermath. It is possible that the man was saying something in one of South Africa's official languages.

It is not clear who is shouting.

The 'Kindergarten Cop' star posted a video on Snapchat of right before the kick.

In the brief clip, Schwarzenegger has his phone on selfie mode but the assailant can be seen right over his shoulder. The philanthropist had just turned off his phone when the kick occurred.

Schwarzenegger posted throughout the day on his Instagram story as he watched kids show off their crafts at the massive sports festival that is judged.

It is unknown what will happen to the man and Schwarzenegger does not plan on pressing charges, according to a statement from the Festival.

'Mr. Schwarzenegger has confirmed that he has no intentions of laying charges. He views this as an unfortunate incident by a mischievous fan,' the statement added.

The statement further explained that police in the area are familiar with the man and have had issues with him at events in the past.

A representative from Black Circle Communications, who released the statement, told DailyMail.com that the man was a 'known mischievous person' who has been handed over to the police.

'Police are currently processing everything and we are waiting on them to get back to us but Arnold has been so generous with everything,' spokeswoman Cassandra Gudlhuza said.