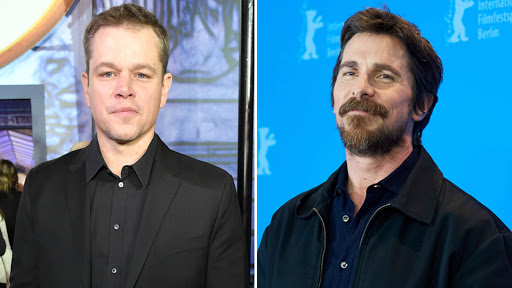 matt-damon-christian-bale
This film is an auto biography action film about Carol Shelby played by Matt Damon and Ken Miles played by Christian Bale based on trials and errors that the two of them go through to make the Ford GT-40 from scratch to beat Enzo Ferrari and his team at Le Mans a 24 hour race that takes place in France.

It takes place in the 1960's. During this time Ferrari and his team were ruling Le Mans and they had won numerous times so Henry Ford II decides to put together a team which consists of Carol Shelby (Matt Damon and Ken Miles (Christian Bale) to build a car capable of beating Ferrari in the race.

I feel content with the main cast considering how well Matt Damon has done for himself, earning an Oscar, Two golden Globes and several other awards and Christian Bale will always be my favorite batman of all time not to mention the man is one hell of an actor.

The story is basically centered around the two of them and the trials and tribulations they went through to win. When I saw the trailer for this movie, I immediately felt this sense of excitement and hopefully the movie will deliver. I mean it was so enticing my work mate who knew nothing about it already set aside a date on her calendar to go watch this movie.

I consider myself a car fanatic so I'm definitely going to see this movie without a doubt. I know the story and how it ends you could too if you google it but I don't think you should, go see this movie with the intention of seeing what happens in the end.

So if your a car fanatic and want to go see history being made this movie just might be for you. It's out in theaters by 15th November 2019.