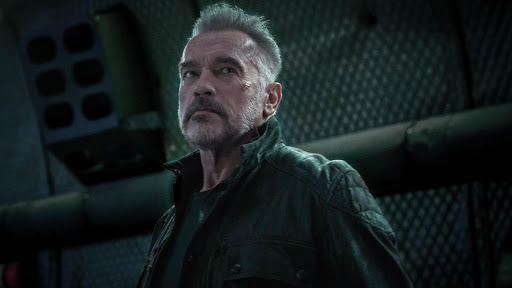 Arnold Schwarzenegger is back to repeal his role as the T-800 a terminator sent from the future and he's not alone. Linda Hamilton (Sarah Conor) from the first two Terminators is back.

I'll be honest, I wasn't a big fan of the terminator series after the third terminator. It just felt like they lost something along the way but I always had hope for the franchise cause a robot from the future just appeals to a certain side of me. So when I heard that the sixth terminator trailer was out I immediately got on YouTube.

This terminator looks a little bit more interesting than the recent terminators that have been released. It has aspects from the fourth and the second terminator. For example the terminator (Mackenzie Davis) protecting the person of interest in this movie is solely human but she's technically still a machine and the Terminator sent to kill the POI in the movie has liquid metal and gives the terminator abilities that the previous terminator (T-1000) which had liquid mental didn't.

In the end i'm going to say I'm pretty excited to see this next terminator considering it's directed by Tim Miller, the man who directed Deadpool. Hopefully it does terminator fans justice. The initial release date is scheduled to be on the 25th  October 2019.