Defying Norms? Why men are rocking girls clothing and accessories 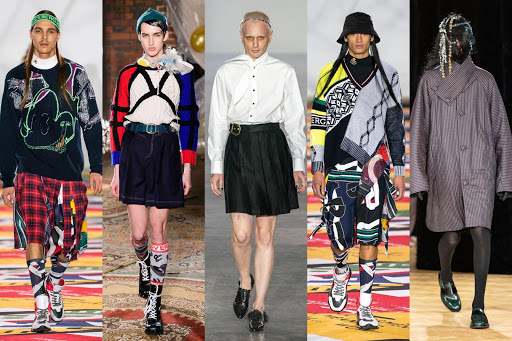 hp-gq-4jan19_b
It's no surprise women's clothing has made its way into men's fashion.

At first it was kind of a shock when rappers like Young thug who wore a dress of the cover of his mixtape "Jeffery," but we can let that go cause Young Thug is well.... Young Thug.

Little did we know that was the start of men wearing women's clothing, accessorizes and considering it fashion.

In 2017 Thom Browne's line had a range of men's skirts dresses and high heels integrated into suits that you should wear to a boardroom meeting and pretty soon a plethora of celebrities would follow. Even in London fashion week men's autumn/winter fashion skirts have become the in thing.

Everyone from former New York Giants wide receiver Odell Beckham Junior, singer Harry Styles to rapper Asap Rocky would arrive to red carpet events with skirts, dresses and other traditionally female clothing and some celebrities would take it a bit further and polish their nails and add extensions.

Male runway models even go as far as to apply make up to make themselves look more attractive on the cover shoot of a magazine. Some men who suffer from balding issues have also been applying men's weaves to cover their natural hair up.

This was eventually set to happen. If you look back at the evolution of men's fashion, the use of women's clothing in men's style was inevitable. Men have been subtly introducing women's fashion for a period of time.

Piercing their ears and plating their hair was just a stepping stone into what we would eventually have today. It wasn't too immediate nor alarming due to piercings and braids not being part of clothing and considering your favorite celebrity at the time probably had either one.

You were influenced to do the same but slowly the clothing was introduced .

Man purses or commonly known as "murses" was all the rage for a certain period of time. Pretty soon dresses,crop tops, skirts and make up became a thing. Most celebrities including Bad Bunny are unapologetic for wearing such. So with all this hype about women's fashion being worn by men where is it heading too?

We'll no one knows for sure, fashion evolves and takes a different form every decade so wherever men are going with this it's unknown but one things for sure women's clothing isn't going anywhere anytime  soon so get prepared to see more.