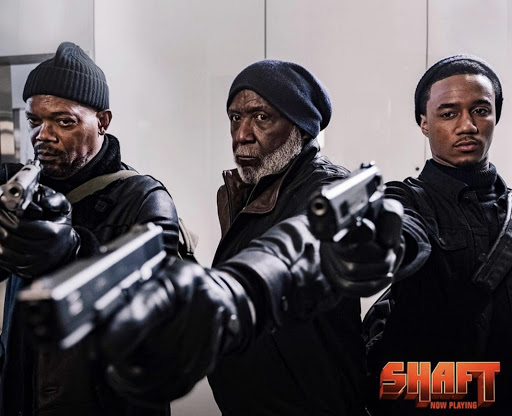 D9ECJnkXYAE8xDU
The last time we saw Samuel L Jackson playing Shaft was in the year 2000.

John Shaft Junior is an FBI analyst who tries to uncover the death of his long time friend. He believes this is a murder, but no one in the FBI will take it seriously so he goes to his estranged legendary father John Shaft for help.

Right off the bat you can tell this is a different type of Shaft than the previous ones.

It has a more of a comedic approach to it and it actually works. 3/4 of the movie you will find yourself laughing hysterically.

Samuel L Jackson keeps you laughing the entire time. Whenever he comes on the screen, he steals the show whether it is shooting at bad guys, intimidating people or having snappy dialogue.

You'll find yourself paying attention to his character the entire time. He gives off this cool, tough, don't mess with me vibe and he doesn't disappoint. He's sort of like the black James Bond with an edge. Or as John Shaft would put it "if that motherf#[email protected]%r ever existed he would wish he were me."

Everyone else does a pretty good job too. If your looking for a serious movie with phenomenal acting, a great plot and impeccable editing, this movie isn't for you. It's more of a movie you would watch on a Friday night at home with your friends.

The plot is pretty simple, it's nothing out of this world but you won't really focus on it. It's more of the characters on the screen that you find yourself paying attention too.

Jessie Usher (John Shaft Junior) does a pretty solid job. You will unfortunately find some flaws in his acting every now and then like in an action scene but it's a pretty small flaw that's barely noticeable. And it doesn't pull you away from the fact that he was entertaining a heck to watch. Regina Hall is great. She pretty much goes toe to toe with Samuel L Jackson when the two of them come on screen. When she's being funny she'll make you laugh, when she's being serious you'll be at attention.

Overall Shaft isn't a movie you want to watch with your kids. It has a more mature audience approach to it. It's not going to win an Oscar nor an Emmy or any serious awards. It's not a work of art and it won't stir up any emotions but it's still a good movie and very entertaining.

If you do decide to watch shaft, walk into this movie with a blank mind and no expectations and prepare to leave in a joyous mood. It's so funny you might end up streaming this movie just to have one more laugh.