Capes and Ponchos, are you bold enough to try them out? 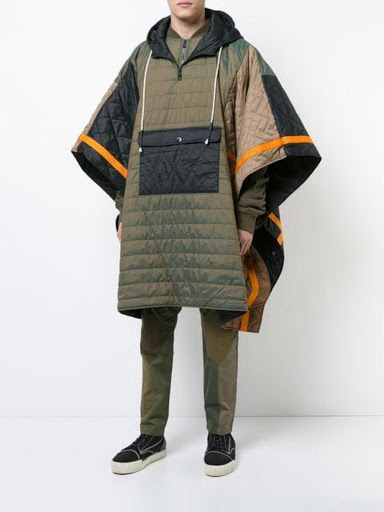 3e8221f5d59b36a0937287a86e8a104a
Mens' fashion  is ever changing and evolving. These days wearing pieces of clothing which are either considered traditionally feminine such as dresses or a bit too casual such as sandals is actually being weaved into high fashion. All with the desired effort to bring a polarizing opinion. Though two garments which have been in mens' fashion as early as the nineteenth century has been given slightly less attention but probably deserves more. The cape and poncho should be on your radar.

A poncho is a blanket with a hole in the middle to fit the head in. Made out of material such as wool to keep the wearer warm. Traditionally worn by Native American and South Americans, the poncho was used to protect the wearer from the elements such as rain and wind. A hood was added and protective layer like nylon to protect the material from the rain water. Worn on special occasions, the poncho today is mostly considered unisex( can be worn by both men and women).

The cape was common in European medieval times especially with a hood added on it. It was heavily associated with the Roman Catholic clergy in the 19th century and the French military forces. Like ponchos, capes today are being worn by women. Used in formal occasions to protect the dress/gown from destruction. For men it's more fashionable to wear a cape that doesn't cover the front to a certain degree and is rather long and roomy to protect from the rain.

A poncho is a bit more casual in nature, with multiple colours added onto the materials it's made out of. It's more of a decorative piece of clothing rather than function if it's made with lighter material but can still be functional. The cape is specifically  formal, more of a flamboyant piece of clothing .

Both can serve their functional, stylish purposes and knows no age or gender but they are a bit of a daring piece of clothing to be worn. If you are confident enough to wear them both, you have an edge on your friends and peers in terms of your style.