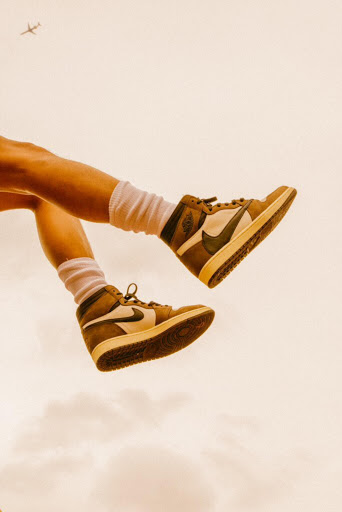 D6SrEQ6W4AAC6wD
Seems like Travis is pretty much on a winning streak. From having arguably the album of the year with 2018's Astroworld to having the biggest song of the year with Drake and being pretty much the brand new face of the Jordan brand. His collaborative sneakers with the brand have been nothing short of successful. Now we can wait for his new Air Max 270 react set to release next year.

The shoes will be released in full family size. We don't know much about the sneaker. Images haven't even surfaced. But they’ll feature the same earthy tones that have become synonymous with Scott’s signature line.

This news comes a couple of days after his highly sought after Air Jordan 1 that sell up to $1000 have been converted into a low top size. Poised to reinvigorate the Jumpman’s low-top market, the Travis Scott  Air Jordan 1 Low arrives in the coffee bean, tapping a colour blocking inversed from its seemingly more popular original. This shoe is one of the most sought after this season by plenty selling for almost $800 in the resell market.

His Jordan 6s were something to behold when we first saw the shoe on his feet during his underwhelming performance at the Super Bowl halftime show back in February, a design that hinges on military themes and colours based on the rugged olive upper, canvas materials, and exterior pocket at the ankle. They retailed for around $ 250.

One of the most notable shoes for the rapper was from last year. he had arguably the best shoe of the year. It had a similar in design to the Eminem pair which are unattainable. These shoes feature a lighter shade of university blue suede on the upper. Black accents, a varsity red, paint splatter detailing, and “Cactus Jack” branding on the back heel tab finish things off for this pair. These dropped in June of 2018 with a retail price for $225.