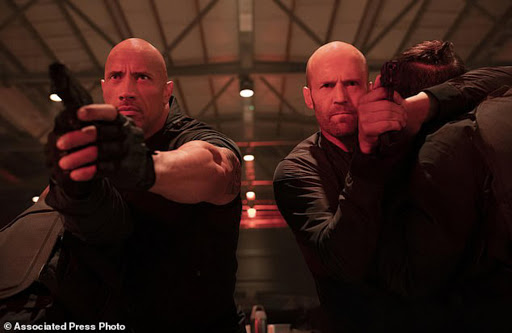 Hobbs & Shaw has smashed its way to the top of the North American box office, pocketing $60.8 million.

Starring Dwayne 'The Rock' Johnson and Jason Statham, the action adventure has also driven off with $120 million internationally for a global haul of $180 million.

And that's without China, where Fast & Furious films are hugely popular, according to

The first spinoff from the 18-year-old Fast & Furious franchise opens in the huge market on August 23.

The Lion King slid to second in its third weekend with $38.2 million.

Disney will no doubt be pleased with its 'live action remake' of the beloved 1994 animation film as it crossed $1 billion worldwide earlier this week.

In third is director Quentin Tarantino's 1969-set fable Once Upon A Time in Hollywood.

Starring Leonardo DiCaprio and Brad Pitt, it held strong with $20 million in its second weekend, boosting its domestic take to $78.8 million.

It has yet to open elsewhere.

Internationally, the Web-Slinger's sticky fingers nabbed another $9.5 million making it the second film this week to top $1.08 billion globally.

Toy Story 4, starring the voice talents of Tom Hanks as cowboy Woody and Tim Allen as astronaut Buzz Lightyear, came in fifth with $7.15 million in its seventh week in release for a local tally of $410 million.

Internationally, the animated feature brought in another $10.2 million for an overseas cume that is now just shy of $550 million and a global tally topping $959 million.

Toy Story 4 came fifth with $7.15 million in its seventh week in release for a local tally of $410 million. Its global tally now tops $959 million