The presidents are in the UK to pay their last respects to the Queen as she is laid to rest. 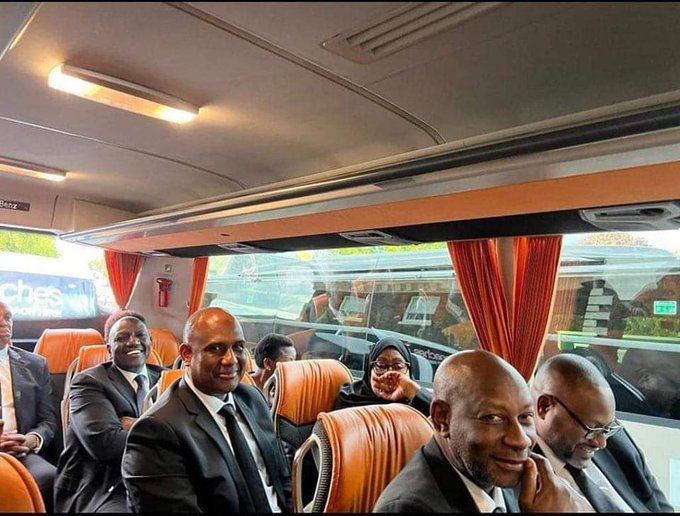 African Leaders President Ruto and other state leaders in a 'bus'
Image: Twitter

Former Nairobi governor Mike Mbuvi Sonko has caught the attention of many after he took it to his Twitter account to comment on the African presidents stuck in one bus.

The presidents are in the UK to pay their last respects to the Queen as she is laid to rest today.

The politician is not the only person who has reacted to the matter, as content creator Njugush has given us a preview of how things are going down and how the African leaders are having the time of their lives.

Check this hilarious video out

You gotta love Kenyans on Twitter as they are always ready to attack at dawn,

KÎJÅÑÅ_¥Ã_KÎÅMBÛ_II™: Differentiate between superpower and power hungry. They will never go hand in hand

Farouk Kibet: The President is Comfortable. There is no need to cause mayhem where it is unnecessary.

KÎJÅÑÅ_¥Ã_KÎÅMBÛ_II™: During Ruto's inauguration mlifanya aje wakenya with those a hundred and something buses tit for tat is a fair game

Godfrey Njagi: Let them be humbled for once, hii kushindanga na motorcades at the taxpayer's money is unnecessary. Maybe they will have a change of mind.

Kimm Kimmh:Lesson learned, Europeans will never like us, it is upon African leaders to do away with foreign affairs

Kenyans were even more miffed that American president Joe Biden had been allowed to enter Buckingham Palace with his convoy while other presidents were allowed that luxury.

Another Twitter handled called NUAMAHONLINE.COM even equated the treatment to slavery writing,

"US president Joe Biden was allowed in the Buckingham palace with his convoy while other leader mostly Africans were packed in fleet of coaches. The slavery is still on."

What do you think? Do you agree with how Sonko's opinion on how the president's (apart from Biden) were handled as far as transport goes?

"I have paid rent for so many people," Sandra Mbuvi on an IG rant

Thickky Sandra and Aaliyah Khan were on an Instagram Live were they addressed trolls terming them as mean people
Entertainment
4 months ago
WATCH: For the latest videos on entertainment stories