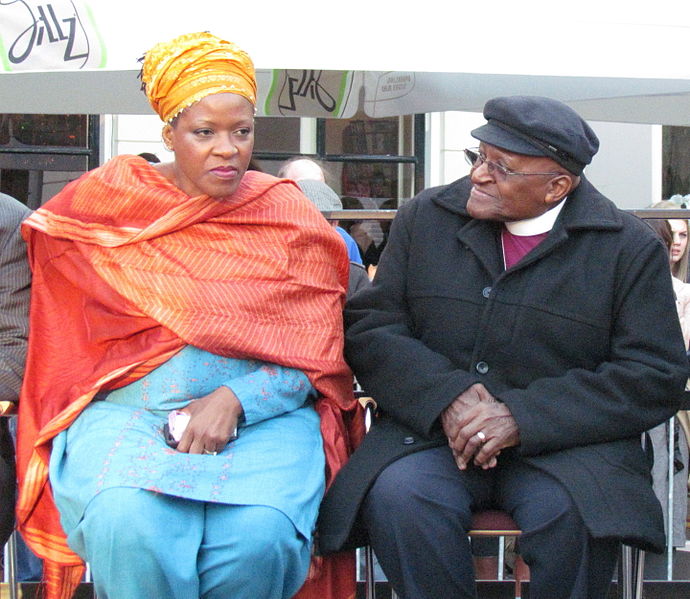 The Church of England has forbidden Desmond Tutu's daughter from officiating at a funeral because she is married to a woman.

The funeral of Mpho Tutu van Furth's late god-father, Martin Kenyon, who was an Anglican priest in the Diocese of Washington, was scheduled for Thursday in Shropshire.

Ms Tutu van Furth told BBC News it "seemed really churlish and hurtful". The Diocese of Hereford said it was "a difficult situation".

Due to its official teaching that marriage is solely between one man and one woman, the Church of England does not allow clergy to be in same-sex unions.

The Episcopal Church, its sister Anglican church in the US, does let clergy to join into gay marriages, though.

"Advice was given in line with the House of Bishops current guidance on same-sex marriage," a statement from the Diocese of Hereford said.

The former Bishop of Liverpool, the Rt Rev Paul Bayes, who is a campaigner for the church to change its position on sexuality, said to "plead that things are difficult is not good enough".

"We urgently need to make space for conscience, space for pastoral care, and space for love," he said.

After Mr Kenyon's family was told of the Church's decision, they moved the funeral service from St Michael and All Angels in Wentnor, near Bishops Castle, to a marquee in the vicarage next door so Ms Tutu van Furth could officiate and preach.

"It's incredibly sad," Ms Tutu van Furth told BBC News. "It feels like a bureaucratic response with maybe a lack of compassion.

"It seemed really churlish and hurtful. But as sad as that was, there was the joy of having a celebration of a person who could throw open the door to people who are sometimes excluded."

Martin Kenyon became an internet sensation in December 2020 when he appeared in a CNN interview after receiving the Covid-19 vaccine.

He told the puzzled American reporter that he hoped not to have the "bug" now because he had grand-daughters, adding "there's no point in dying when I've lived this long, is there?"

Ms Tutu van Furth was forced to give her up right to officiate as a priest in South Africa after she married Marceline van Furth, a Dutch academic, in 2015.

Her father Desmond Tutu, who died in December 2021, won the Nobel peace prize in 1984 for his struggle against apartheid in South Africa. He also campaigned in favour of gay rights and had backed same-sex marriage.

"I would refuse to go to a homophobic heaven. No, I would say sorry, I mean I would much rather go to the other place," he said in 2013. "I would not worship a God who is homophobic and that is how deeply I feel about this."

He added: "I am as passionate about this campaign as I ever was about apartheid. For me, it is at the same level."

Brendah Jons-I am no longer a lesbian