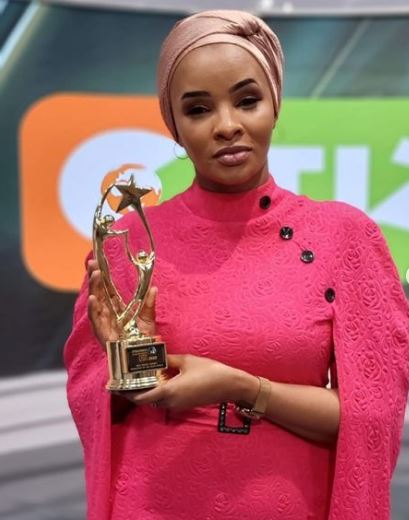 Citizen TV presenter Lulu Hassan has had quite a remarkable year. She has won many awards that attest to her talent.

On Monday October 17, Loulou won the producer of the year series/movie category in the highly anticipated Zikomo award.

The ceremony went down in Zambia, where she eagerly received her award on stage.

Loulou shared a message of gratitude for the recognition

Adding that with God everything is possible. Her cute hubby praised his hardworking wife.

Loulou is the CEO of Jiffy Pictures- a production house that specializes in the production of adverts, series, telenovelas, commercials, and films.

Below are some other achievements the mother of three has made in the recent times.

The Tanzanian industry recognized Loulou for her role in the East African film industry. The accolade was for women in different roles.

"Taking this opportunity to thank God for the far He has brought me, but most of all, I want to say I couldn't do this without all of you. Thank you for supporting me," she stated.

3. In February 2021, Loulou was voted most stylish TV and Radio personality in the couture africa award. She was declared the 2020 female nominee. The CAStyle awards went down at the Ole Sereni.

4. She landed the role of MC for the Madaraka day celebrations in 2021. This is a notable achievement for media personalities.

Loulou Hassan got her break in media after a phone call conversation in Mombasa with a man who complimented her voice.

She worked as a receptionist and on picking a call, the man encouraged her to try her luck and applied as a radio presenter.

‘’Kwa one of the newspapers niliona, they were advertising for TV presenters, news anchors and radio presenters, I applied but back then sikuwa nimesomea journalism nilisema let me try,” said Hassan.

At just 20-years-old, she blindly sent her voice recording and got her first job as a part-time radio news anchor while she pursued her studies in media.

TV Personality Lulu Hassan has been crowned the Best Movie/Series Producer of the year in Africa at the 2022 ZIKOMO Awards.
Entertainment
1 month ago

The couple is blessed with three kids, two boys, one girl
Entertainment
3 months ago
WATCH: For the latest videos on entertainment stories