She’s reportedly attempting to uncover who is behind leaks in her camp, after her 2016 affair with current boyfriend Bryan Tanaka was revealed by DailyMailTV.

But Mariah Carey set aside her problems for an evening with her children on Sunday night.

The pop star, 49, appeared relaxed as she left Dan Tana’s in West Hollywood, holding hands with her eight-year-old twins, Monroe and Moroccan. 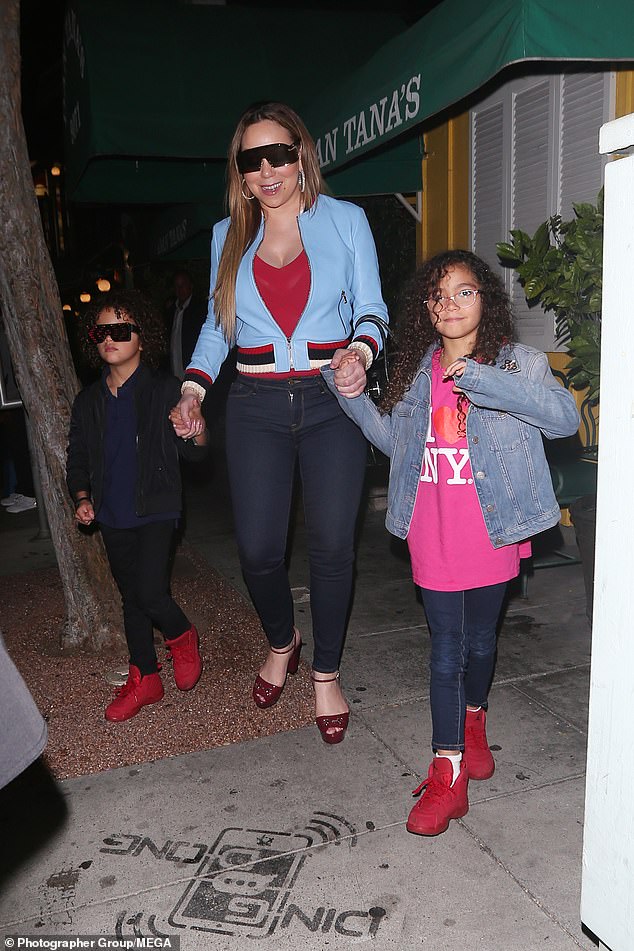 There was no sign of trouble on Mariah’s face as she left the eatery in the company of her children.

In fact, the Always Be My Baby singer appeared upbeat as she flashed a wide and glowing smile

Mariah was styled from head-to-toe, as usual.

She styled her brunette locks down sleek and straight, while accentuating her radiant complexion with lip gloss and rosy blush.

Mariah also wore a cool pair of sunglasses, just like her son.

The outing comes just a week after DailyMailTV broke the news that Mariah had cheated on her billionaire ex-fiance James Packer with her current boyfriend Bryan.

Over the weekend, it was reported by NW magazine that Mariah has been ‘stamping her stilettos’ in frustration ‘because she doesn’t know who is spilling [the] information.’

A source close to the singer added that ‘figuring out who’s leaking stuff is her top priority right now’.

In a DailyMailTV exclusive earlier this month, it was revealed that Mariah and Bryan, 36, began dating before she broke off her engagement to James, 51, in 2016.

The songstress was filmed grinding on the back-up dancer more than six months before her split with the businessman in a bombshell video obtained exclusively by DailyMailTV.

The video was shot inside the Hotel D’Angleterre in Copenhagen, Denmark, in March 2016 when Mariah was in the country for a concert.

The list of mixed race celebrities in United States of America

Is Ariana Grande and her fiance Pete taking it too fast?

Mariah Carey sells her Sh1.3billion engagement ring from ex-fiancé James Packer for a fraction of the price

Mariah Carey To Start Beauty Company Alongside Her Manager

Tanasha reveals her relationship with Mwijaku, man who claimed to be...