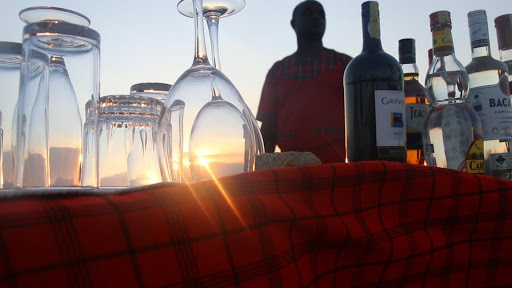 172229
The heat is a constant presence that open windows and makeshift fans have no effect on. It has a very distinct smell. It is the dust disturbed from planes landing and tour vans disappearing into the national park, leaving nothing but brown clouds and scattered birds. It is an arid scent caused by too little rain. It it’s the smell of animals you cannot see, but who have left fading footprints and droppings littered in the bush. And while the heat may slightly singe your nose as you take in a deep breath to dispel the stale airplane air, it is clean and it is fresh and your first welcome to Samburu.

The second welcome comes from our tour guide Chris. Dressed in traditional Samburu garb, he looks decidedly cooler than us as he welcomes us with a big smile and an outstretched hand, taking us to the waiting tour vans.

“The hotel is only around twenty minutes away, but we will first take a short game drive. The road is a little bumpy – we like to call it the African massage.” He adds the last part with a small laugh. And while you can tell he’s told the same joke over and over again, we all chuckle conspiratorially, grab our bags and climb into the van.

Our destination thanks to Kenya Tourism Board, is Samburu Intrepids Luxury tented camp set on the banks of the Uaso Nyiro river. But first we have to drive through the park. As we get to the gate, Chris tells us that it is the same park that in 2002 made international news after a lioness name Kamunyak adopted a baby Oryx.

“We also have the Samburu special five, you can only get them here.” He adds proudly. These are the Grevy’s Zebra, Somali Ostrich, Reticulated Giraffe, Gerenuk and Besia Oryx. The park is also home to Elephants, large predators such as the Lion, Leopard and Cheetah.

The drive is scenic. Even during the dry season when river beds dwindle and trees are mainly bare, Samburu has a rugged beauty that captivates you. With each corner turned, the park opens up exposing long necked giraffe gracefully sauntering across plains carpeted with tall yellowing stalks of grass. There are harems of female Oryx’s huddles under trees and bushes for shade while the male keeps a watchful eye as we drive past.

Eventually we arrive at Samburu Intrepids camp where we are told to check in, have lunch and relax before our late afternoon game drive with a special surprise. After the dusty, bumpy drive, the camp is a veritable oasis. Sitting raised in the trees, it is an explosion of green. The reception, bar and restaurant feel like being in a treehouse and all you hear is the birds above you and monkeys chattering to each other.

We are warned about them, the monkeys, and their tendency to steal from guests. As if they were listening, as soon as we are told this, one sneaks up to the table, grabbing a fruit piece from an unattended cocktail. As attention is on him, another monkey quickly drops to the deck, grabs a tea cup, rushing back to the canopy before it can be retrieved. It’s a brilliant display of team work that I have to respect.

The rooms are beautiful luxury tents dotted amongst the trees and raised so you too can wake up with the birds. There are different options, the luxury single, double,  twin tent and  triple. Each topped with palm thatched roofs, they are charmingly decorated with safari style furniture, thick soft duvets on top of four-poster beds you may never want to leave. The tents are also surrounded with netted screens which not only mean a constant breeze but also stunning views.

After lunch and a much needed respite by the pool, made even better by the cocktails brought to us by the bar staff, it was time to head back into the park. This time it was cooler, the magic hour just before the sun sets.  Everything was washed in the warm orange light of the sun, threads of pinks and reds stretched across the sky and the park was transformed.

A few minutes after we had left, there was some excited chatter coming from Chris’ radio.“There’s a leopard, eating.” He told us, and instantly the energy in the car increased as we sped towards the illusive animal. After a short drive, we were finally there. Hidden in the bush emerged the leopard. Sleek, beautiful and lithe it walked back into the park, stopping shortly to assess if we posed any danger, before disappearing.

Our surprise was a sundowner arranged for us by the camp. But before we arrive, just as the sun kissed the horizon, a large male elephant appears in front of us. It is immense and majestic and we hold our breaths as it slowly walks in front of the van. It doesn’t rush, it doesn’t hesitate, it doesn’t cower. It knows that here it is home, and here it is king.

I don’t think I breath out until we reach our sundowner spot – and that’s because it was breathtaking, literally. With the Laikipia hills in front us, the park behind us and the sun setting, it is the perfect end to a perfect afternoon.  We are served a light supper and made cocktails while we watch the sun slowly set as the sky goes dark only to make way to pinpricks of light so bright they illuminate the entire park.