They’ve reportedly been discussing having children since making their relationship Instagram official in December 2018.

Now Nicki Minaj seems to say she’s engaged to her jailbird beau Kenneth ‘Zoo’ Petty, 41, on her verse on a Chance the Rapper track released Friday.

The 36-year-old rapper and singer also indicated she was pregnant on the new track. 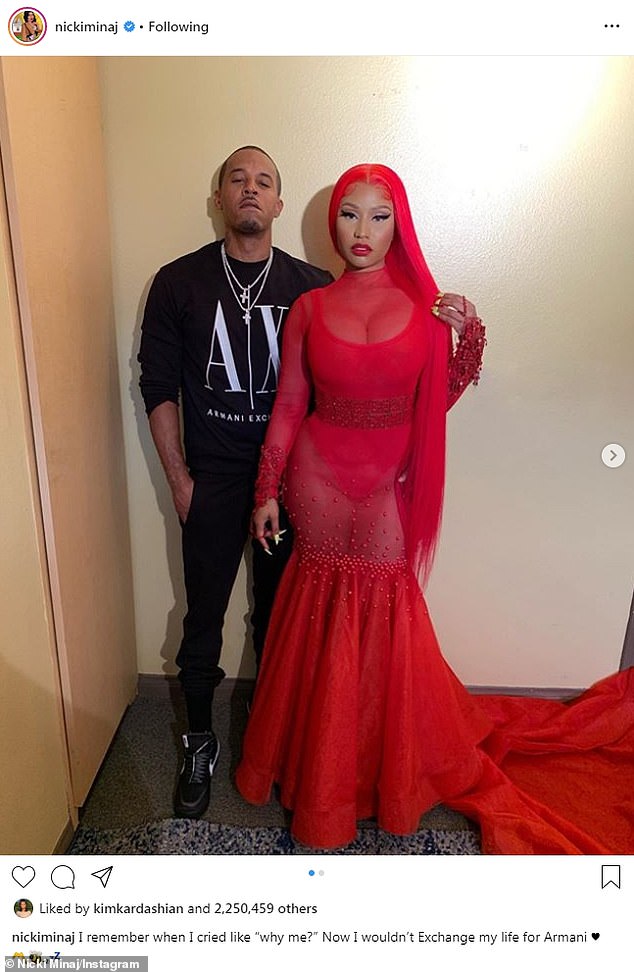 The possible admission came on Chance’s track Zanies And Fools, off of his debut album The Big Day.

‘He the Clyde to my Bonnie, ’bout to walk down the aisle and be a mommy,’ she raps on the track.

‘Ooh, I remember when I cried like, ‘Why me?’ / Now I wouldn’t exchange my life for Armani,’ she adds, clearly happy with her current life.

The musician (born Onika Maraj) drew the attention of her 104 million Instagram followers to the lyrics via a series of photos she posted to the service while posing with her boyfriend.

The Monster rapper was dressed in a sheer red dress that covered her up from her neck down to the floor.

The translucent outfit featured a red bodysuit underneath, and the dress included a thick ruched train.

The 5ft2in occasional actress matched her hair to the clothing with a bright scarlet pin straight wig that reached down at least to her thighs.

Standing behind her and giving off a tough glare was Kenneth, wearing a black Armani Exchange sweatshirt that alluded to his girlfriend’s lyrics, plus black jeans and black sneakers. 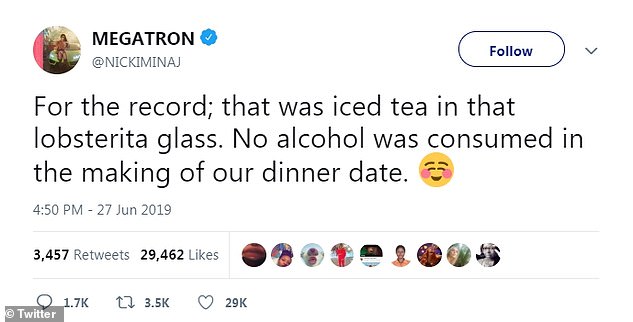 Fans suspected Nicki might be pregnant back in June when she tweeted about not consuming alcohol.

‘For the record; that was iced tea in that lobsterita glass. No alcohol was consumed in the making of our dinner date,’ she wrote, followed by a rosy-cheeked smiling emoji.

Though she may have just wanted to cut back for health or social reasons, the earlier tweet and her new song lyrics left some social media users convinced she was expecting.

‘THIS IS NOT A DRILL NICKI IS PREGNANT AND SHES GETTING MARRIED,’ screamed one Twitter user.

‘OMG AT THE END OF ZANIES AND FOOLS NICKI SAID SHE WAS PREGNANT LISTEN TO THE WHOLE THING LIKE 10 TIMES AND YOULL HEAR IT,’ tweeted another.

‘If nicki minaj is actually pregnant im about to be born again see yall in 9 months,’ joked another user.

For better for worse: Nicki Minaj stands by husband Kenneth despite arrest

‘Staying strong for momma’ Davido shares picture with his daughter

R Kelly pleads to be released over fears of contracting coronavirus...

‘I deal with it as it comes’ Diana Marua on her relationship with Bahati’s...

‘This is how sponyo’s run the economy’ Andrew Kibe shares

‘Shame on you!’ Redsan calls out newspaper for claiming he is a poor performer

‘It’s been a year since I hit rock bottom’ Natalie Tewa surviving break up...