Dennis Itumbi has been arrested in town, a short video showing a convoy of cars around 680 Hotel believed to belong to police has emerged.

In one of the cars, is Dennis Itumbi who is the secretary digital, innovations and diaspora communications and is based at the Deputy President’s office in Harambee Annex.

He was nabbed in town on Kenyatta Avenue.

The video was taken by one of Dennis’ pals who was with him when he was arrested a few minutes ago.

OUR SOURCE CLAIMS THAT “THE DESTINATION OF THE SAID CARS AND WHERE THEY ARE TAKING DENNIS ITUMBI IS UNKNOWN.”

Here is the photo of the car that sped off with Dennis after his arrest.

And here is the video 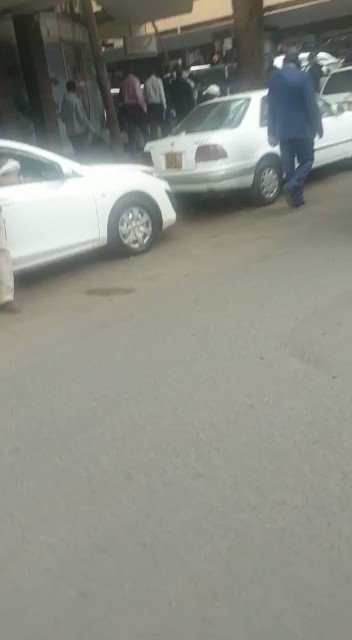 Dennis Itumbi has been bundled into this car by people believed to be police.

This comes after Dennis Itumbi lashed out at the Daily Nation newspaper over an article he alleges indirectly and erroneously links him to an ‘assassination’ letter against Deputy President William Ruto.

The newspaper carried an article on Sunday which said two of Ruto’s aides are being sought by the DCI on suspicion they circulated the letter. It said the two are from the communications department.

“They mentioned where the communication officers allegedly being sought work. We are about 10. None of us got a call or a text. Copy and paste journalism from unnamed sources who lie, should not find a home,” Itumbi said.

He went on, “Journalism is at its lowest form, when @dailynation pens a story and reproduces allegation after allegation – but does not bother to call or text any of the communication officers in the Presidency they claim are being sought by @DCI_Kenya and are in hiding. Objective verification.”

Overflowing love! Photos of Jacque Maribe with her family and friends that will warm your heart

‘My wife is not a gold digger!’ Bobb Muriithi defends wife Izareeh

‘Fight the thieves then!’ Kibe angered by Betty Kyallo saying she will only cook...