It’s rare you’ll see a celebrity on Instagram looking anything but perfect.

But in their quest to present the most flawless version of themselves, stars from around the world are going to extreme lengths to edit their selfies.

Unfortunately, many of them aren’t successful in their attempts to disguise their digital enhancements, with fans accusing them of ‘Photoshop fails’ almost daily.

From Hollywood A-listers to Married At First Sight contestants, Daily Mail Australia looks back at some of the worst Instagram gaffes in recent years. 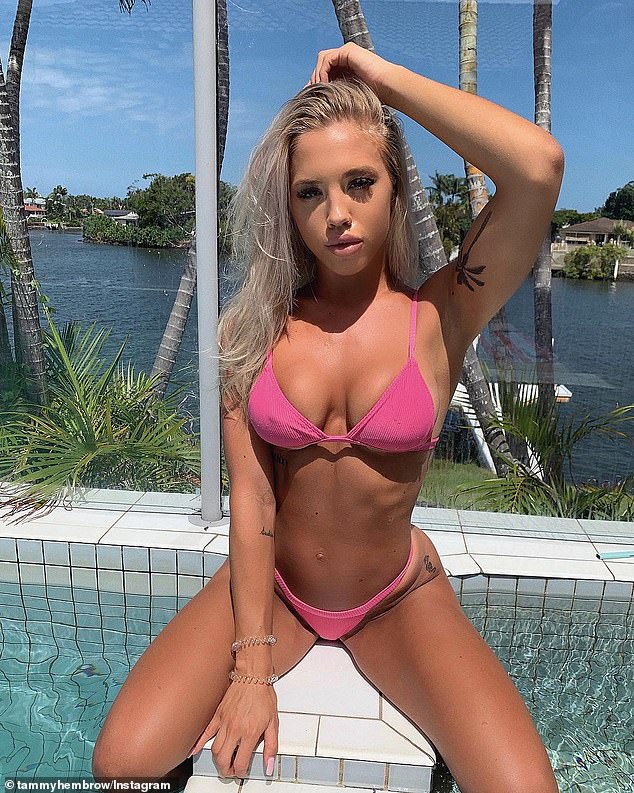 Can you spot all of the celebrity Photoshop fails? Reality stars suffer VERY embarrassing gaffes in their Instagram snaps – from bulging biceps and wobbly walls to missing limbs. Pictured: Tammy Hembrow

In 2015, Lindsay Lohan suffered the most epic of Photoshop fails in one snap taken in her home.

The actress was ridiculed on social media, as a noticeably wonky wall next to her backside suggested the image had been ‘warped’ before she decided to share it.

In editing programs, the ‘warp tool’ allows a user to subtly reshape parts of their body, but this technique becomes more obvious when other areas of the picture become distorted as a result. 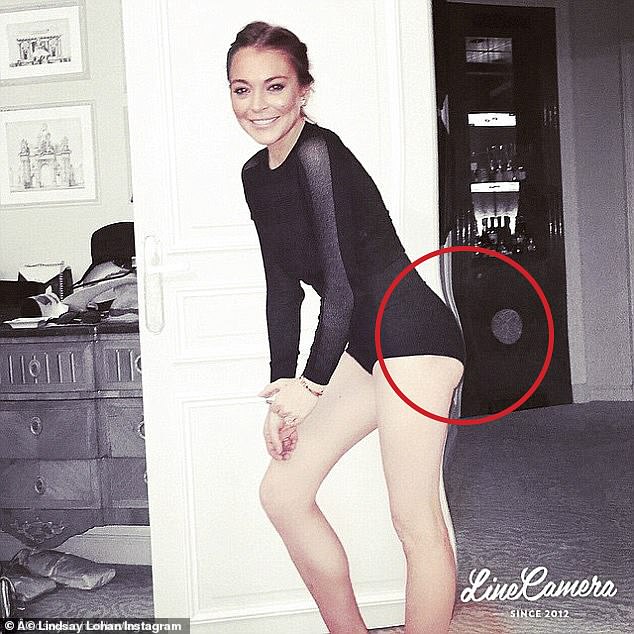 Earlier this month, Ines Basic made headlines when fans noticed a bizarre anomaly in a photo she shared to Instagram.

The Married At First Sight star flaunted her slender figure in a body-hugging dress, but appeared to have accidentally airbrushed her right knee off.

‘I’m confused where you right knee is?’ one of her followers wrote. 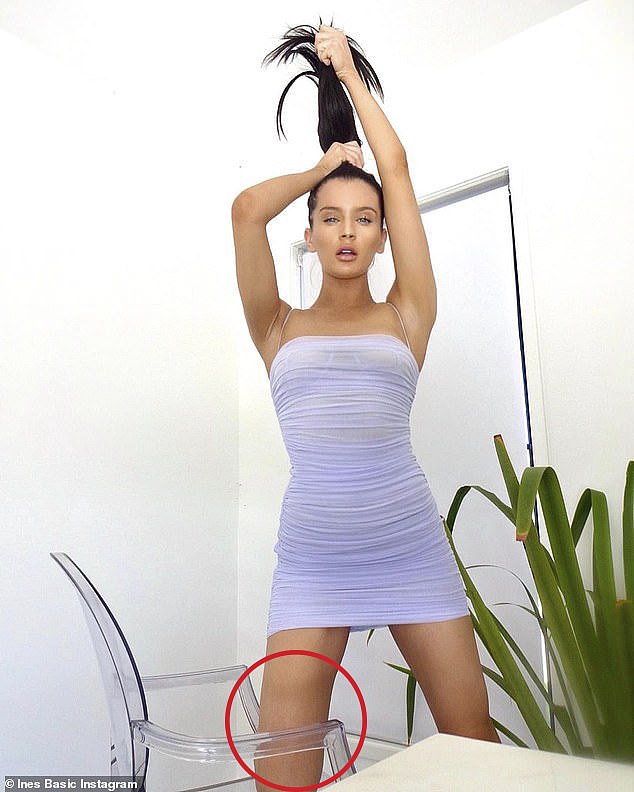 The mystery of Martha’s wobbly arm

But one picture, which showed Martha posing among tropical trees, left fans confused due to her seemingly bendy forearm.

She has denied editing the photo, however, saying that the flash from her camera cast shadows from the branches across parts of her arm, making it look unusual. 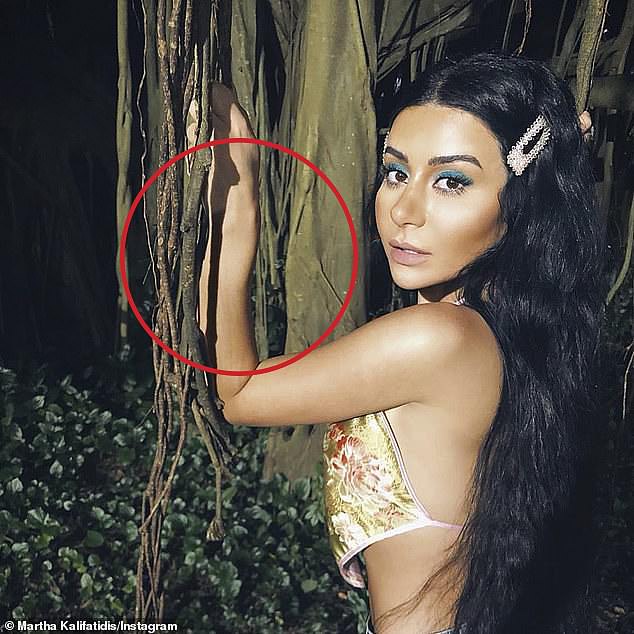 Of course Martha is no stranger to slightly tweaking her photographs.

During her time on Married At First Sight, she was busted editing her promotional snaps, after the original versions had already been published.

In one example, she made her neck appear thinner, slimmed-down her waistline and smoothed out her complexion.

Did Kylie Jenner’s pillow give the game away?

Kylie Jenner was recently accused of editing a photo of herself and her friend Anastasia Karanikolaou while on holiday in Turks and Caicos.

The picture showed the two women posing on a sofa, but many fans questioned why the stripes on the pillow behind them looked warped and distorted.

It is unclear if Kylie did tweak the picture, or if the ‘fail’ was simply a trick of the eye. 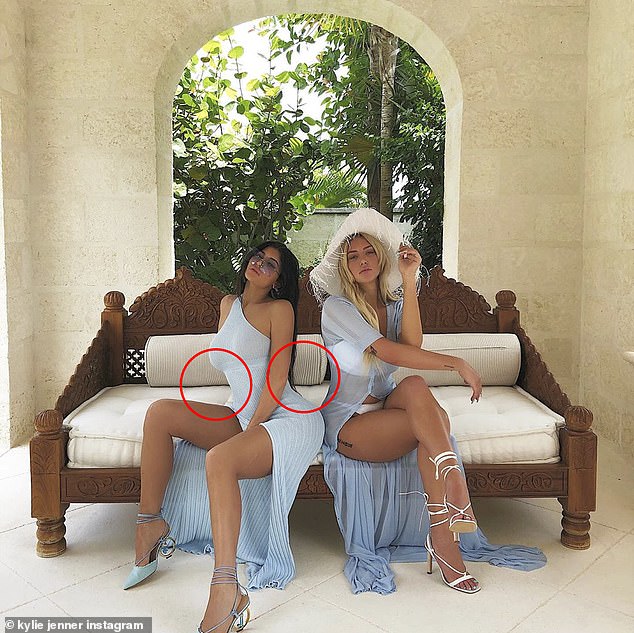 In January, Love Island Australia’s Amelia Marni and Josh Moss left fans scratching their heads after sharing a photo from their holiday in Bali.

Posing beside the pool in their luxury villa, Josh’s Instagram followers soon began wondering why his girlfriend had only one leg.

In the photo, 22-year-old Amelia posed with her legs folded while Josh, 25, placed an arm over her thigh.

Josh’s hand placement, unfortunately, had an ‘optical illusion’ effect and made it look like Amelia’s thighs had morphed into one.

It also appeared her limbs had been ‘smoothed over’ with a filter, accidentally erasing the gap between her legs. 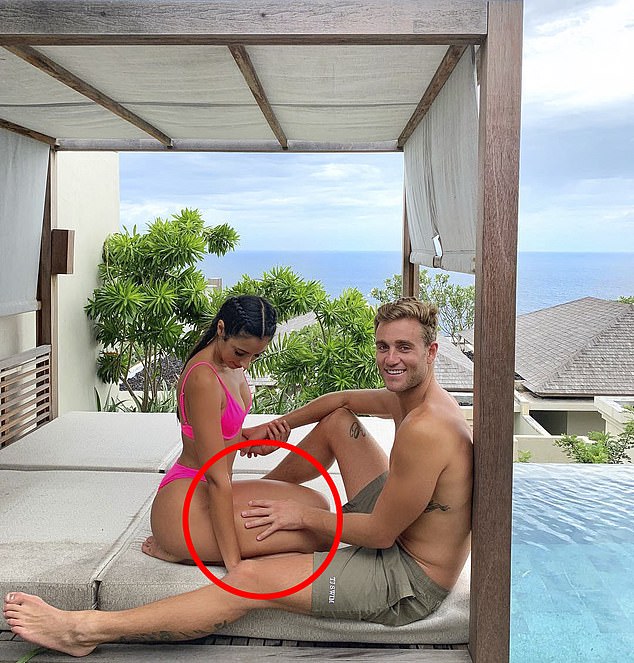 Amanda Holden’s holiday picture went viral for all the wrong reasons in 2016.

As the British TV presenter showcased her incredible beach body on Instagram, fans were quick to accuse her of a huge ‘Photoshop fail’.

Looking beyond the star, who was gazing out to sea, the horizon of the ocean either side of her was unusually wonky, suggesting something had been edited.

Adding to the mystery, Amanda abruptly deleted the snap in response to criticism. 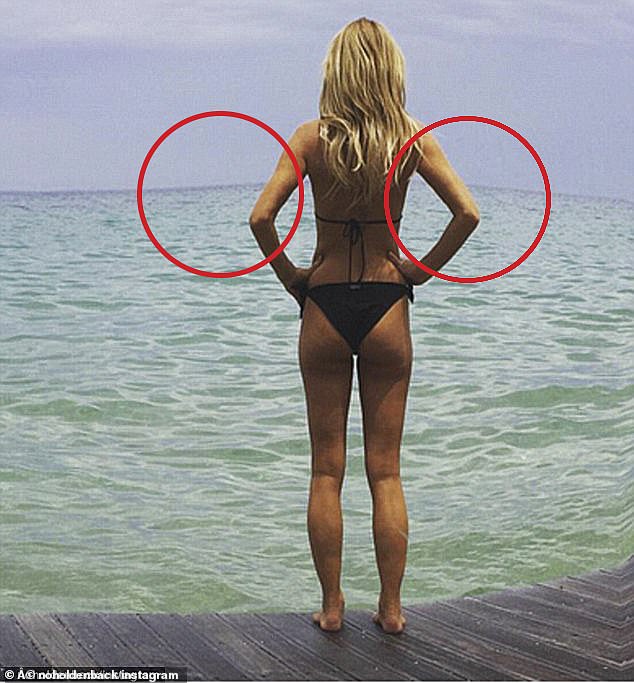 The theory behind Bachelor Jake’s bicep

In 2017, a warped wall in the background of Jake Ellis’ selfie led to suggestions that he had digitally enhanced his bicep.

However, Jake insisted at the time he only used a filter before posting the picture, and didn’t take advantage of the warp tool.

‘Honestly I only know how to edit a photo with an Instagram filter or a depth effect photo using an iPhone. That’s the extent of it,’ he explained. 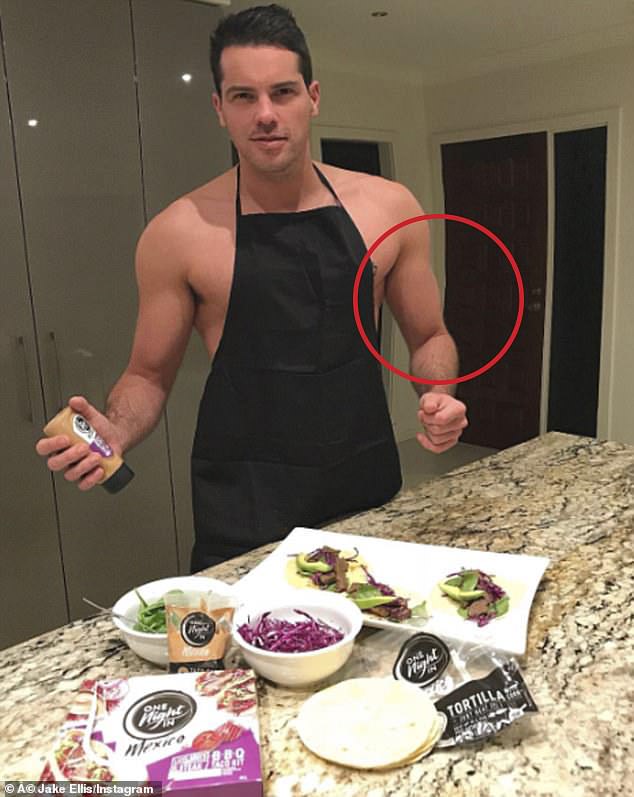 Pop superstar Beyoncé has long been accused of editing her Instagram photos.

And in 2014, it appeared the artist didn’t have a step to stand on, when one holiday snap suggested that her thigh-gap had been Photoshopped.

While the staircase she was descending was perfectly horizontal in most of the picture, it looked disjointed in the small area between her legs. 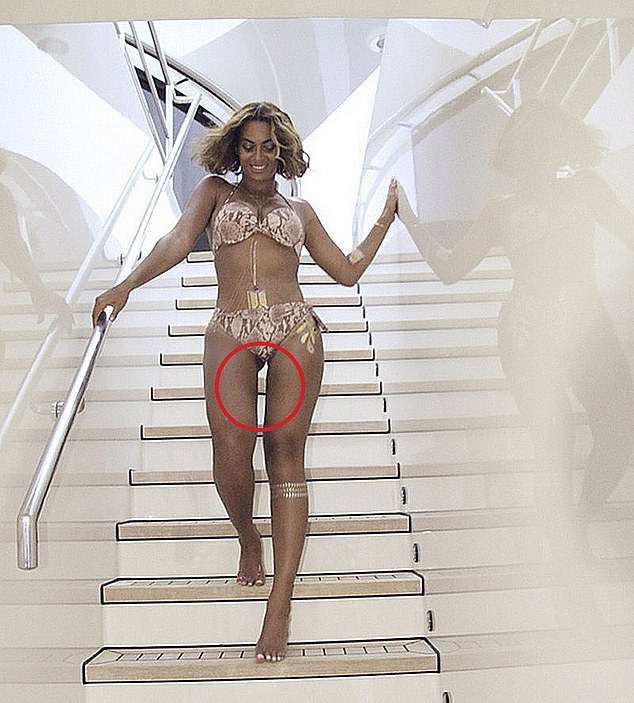 But in May, the 25-year-old fitness entrepreneur came under fire for ‘curves’ of a rather different kind.

Eagle-eyed fans were drawn away from the model’s washboard abs to a detail in the bottom right of the picture: a seemingly wobbly truck driving on the street below.

Some of Tammy’s supporters, however, explained that the truck only looked bendy because of the natural curve of the balcony’s glass. 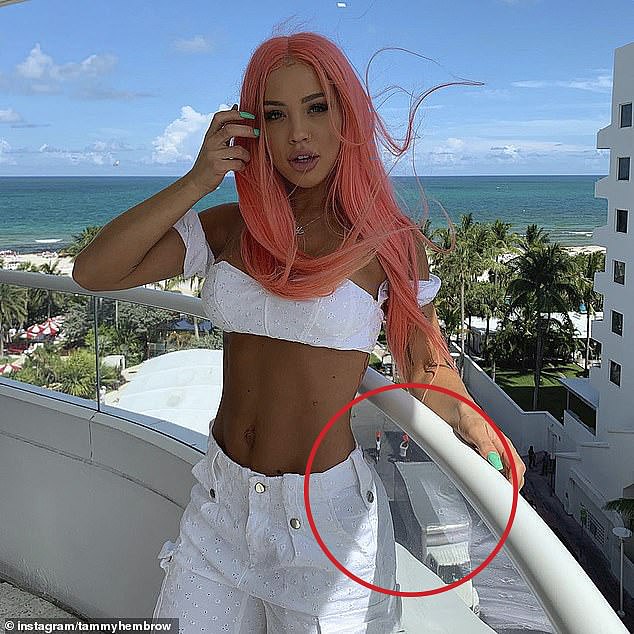 In late June, Jules Robinson underwent an ‘International Body Wrap’, which removes toxins from the body, blasts away cellulite and takes centimeters off one’s waistline.

But, as pointed out by NW on Monday, the Married At First Sight star’s selfie taken during the treatment confused fans due to the wonky bedspread in the background. 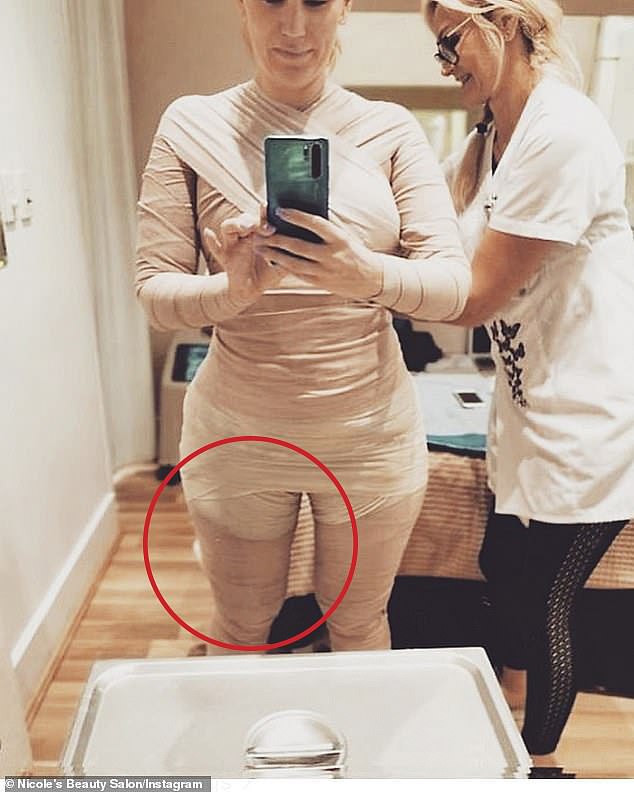 Flo’s not got the flo on the boardwalk

In 2017, The Bachelor’s Florence Moerenhout flaunted her sensational figure in a bikini while posing at St Kilda Beach in Melbourne.

But fans were distracted by the boardwalk, which appeared to bend unnaturally around her bottom and thighs, suggesting she had used a warp tool. 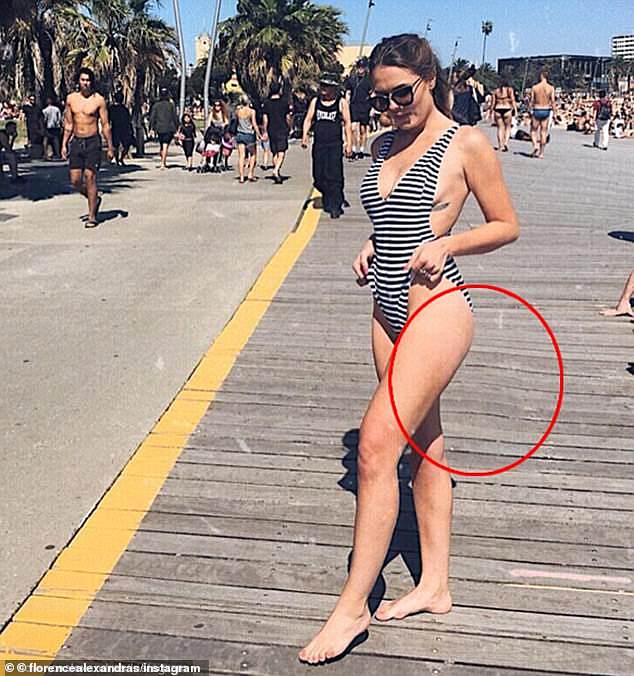 Natural Beauties! A List Of Female Celebrities Who Would Still Look Great After Cutting Their Hair