'I do not sleep with married men!' Huddah Monroe 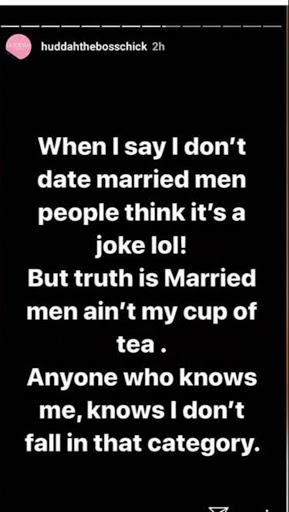 But the one you should leave her out of is the category of women who sleep with married men. She says that is not her cup of tea.

Named as one of the biggest socialites we have in Kenya, she has severally mentioned she made her money from sleeping with men who have money. The power of her kitty. But married men never.

The notion out here is most men with money are married and so that is why she has been grouped as those chics who break marriages.

but the truth is married men ain't my cup of tea. Anyone who knows me  knows I don't fall for  in that category

A few weeks ago she was in trouble with her mother for tellin women to stop borrowing money all the time. The solution, sleep with men who will pay you for the service then start a business with that capital.

Huddah clearly does not shy aware from airing out her hustle.

The other socialite, Bridget Achieng also talked about people saying she is a call girl. It is just a coincidence that the men who are attracted to her have money. Of course, her followers did not believe her but she made sure it is clear.