Nelly The Goon: Bandana ya E-sir was birthed two years ago 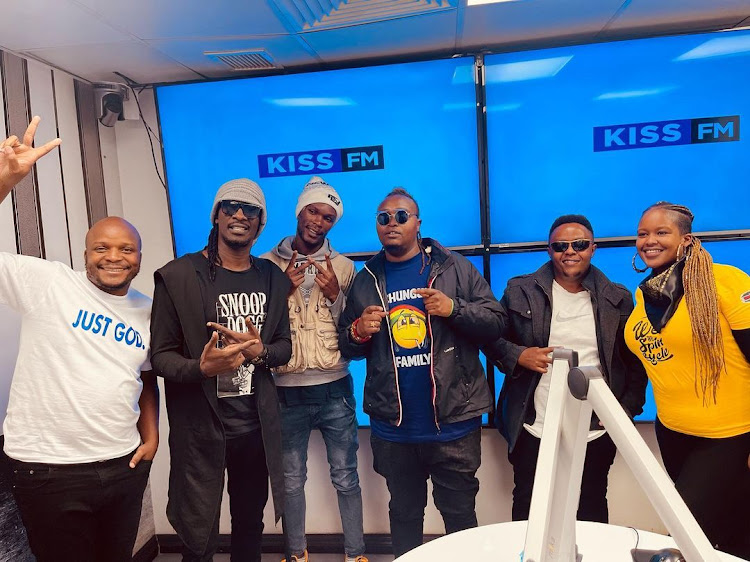 Nelly the goon , nameless and kamene and jalas in kiss studio

'Bandana ya E-sir' song by Ochungulo, Nameless and Habib is just a day old but it is already doing well across all digital streams and mainstream media as well.

Speaking to Kamene and Jalas, Ochungulo's Nelly The Goon said he wrote the song in honor of the late E-Sir before he met the likes of Nameless and Habib.

"I wrote the song two years ago and I wrote it based on my liifestyle and what I knew about E-Sir," said Nelly The Goon.

I sent the song to Telehmani and he is the one who linked me with Nameless.

Asked what inspired the collaboration, Nameless said that he had been thinking of a way to reintroduce E-Sir's to the younger generation and when Nelly came calling, it was a dream come true.

He said; E-sir would be turning 40 this year and when we went to his memorial we said we needed to think of something to reintroduce the brand to the younger generation.

Out of nowhere i got a call from Nelly and told me he had something that would interest me. When I heard the song I loved it. I felt this feels right and I sent it to Habib (E-Sir's brother) and he liked it.

Among the lessons Ochungulo learnt from working with a legend like Nameless was that good things take time.

They said they are used to doing music and the video in a single day but this project took them a whole year and that has taught them a lot and have gained much lessons.

Habib said working with Ochungulo was eye opening and he was surprised to learn of their humility.

Nime learn don't judge a book by the cover hawa watu are humble guys and I thought ni watu maringo.

Nameless: Portion of the earnings will go to E-sir's family