Why Sauti Sol launched a project for kids 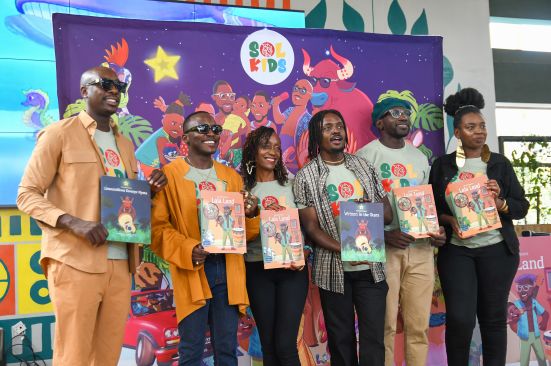 Grammy winning band, Sauti Sol has launched 'Sol Kids' to nurture a generation of children who understand, appreciate and celebrate the privilege of being African.

Sol Kids will carry all children's content for the brand, targeting children aged 0 to 18 years.

Polycarp, a father of one, launched two books, titled 'Lala Land' and 'Written in the Stars'.

Speaking to Word Is, Bien said it is a product of a dream where African children have access to content that is for them, by them and about them.

"Traditionally, African stories were passed down orally. In all of that, a lot of things get lost in translation," he said.

"The aim of this is to digitalise African storytelling and to make sure our kids get to know about our stories from us."

Bien said he has a book called 'Bald Man Comic'.

"I also have a series of them coming up soon, but this one is about the Western province, where I come from."

"This comic is the first in a series of comics that will span the life of the main character, Bald Man, journeying back into his life as a young boy, Alusa, and showcasing the beauty of the Luhya culture."

Chimano said he would like to pass the message in his EP, 'Heavy is the Crown'.

"Every one of us is going to have our own projects. Mine will be based on my album, 'Heavy is the Crown'," he said.

"Everybody carries a weight of trying to prove themselves or have a success out of their lives. It is about independence of thoughts and wearing your crown."

In a press release, Sauti Sol said their mantra is 'Stories by Us, for Us and About Us'.

"Our goals as Sol Kids are: (LEA – A play on the Swahili for nurture). Literacy: Through books, content and media, we will raise readers using Pan African content and culture.

"Empower: Using relatable context that empowers Africans to see their past, present, potential and future. Accessibility: High-quality content that is accessible to all children on all platforms."

Sol Kids is a venture founded by Sauti Sol and Melissa Wakhu, a seasoned author with six best-selling children’s books and more than 20 years' experience working with children.

In addition to joining Shahara as Creative Co-Founders, Sauti Sol will also share their own exclusive content on the platform, starting with Bien ...
Entertainment
3 months ago