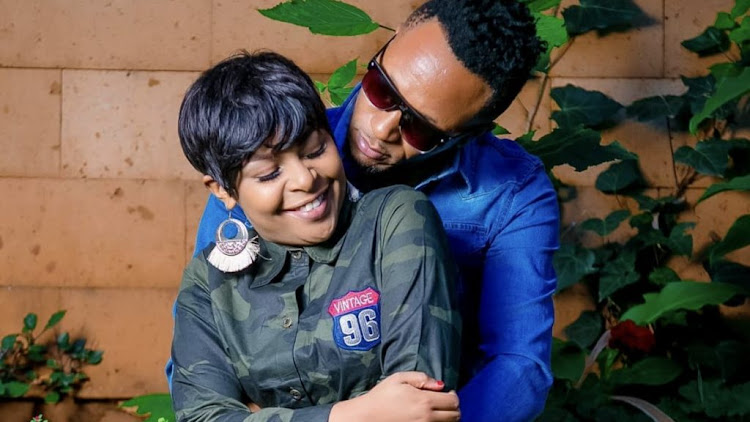 Gospel disc jockey is in a happy marriage with his lovely wife, Size 8 but the journey to settling down has not been all rosy for him.

Yes it seems like not every angel represents peace, love and serenity. His, was more than character development as he was left with an egg on his face.

"When I was in secondary school I wrote a love letter to a girl named Angel and I did a big mistake, I referred to her as 'Angle' instead of Angel on the letter," said Mo.

The lady did reply to my letter but she circled the mistake with a red pen and that  was the last time I ever wrote a love letter.

His marriage has endured all sorts of challenges and neither DJ Mo nor Size 8 hide from the truth. The two never shy away from opening up about the struggles they have endured over the years they've been married.

In a recent interview with Chito and Cyd, Size 8 shocked many when she revealed that she kicked her hubby out of their house in 2016 following a disagreement. She blamed her actions to how she used to overact to situations, something that has now changed.

The mother of two said that before she matured into handling things calmly, she had moved out of her matrimonial home back in 2018 after a disagreement with Mo.

"Yeah I have moved out but not recently was it 2018 there I moved out? Yeah I did! Nikatoka nika pack na nika get hao yangu. You know what I like about me and my husband we are honest about our marriage walk. Marriage is a beautiful journey but it has its ups and downs and me before I matured into a lot of things I used to overreact." She said.

The woman of God said they try as much as possible to live an honest life and not paint a perfect marriage picture in public because they would be negatively impacting someone else.

I like being honest with marriage 'cause when you are honest you encourage other people. When you paint a picture of perfection you make other people feel like they are in hell.

Size 8 is grateful that she has matured overtime and God has really seen her through even in her marriage.

King Kaka recalled on a day their house was locked because her mum who could not afford to pay Ksh 5oo worth of rent.
Entertainment
7 months ago

Speaking in an interview with Chito and Cyd, the mother of two says before she matured into handling things calmly, she had moved out of her ...
Entertainment
9 months ago

Five days ago, Size 8 shocked many when she dropped her new 'Songa' project in which her hubby DJ Mo made his debut as an artist.
Entertainment
9 months ago