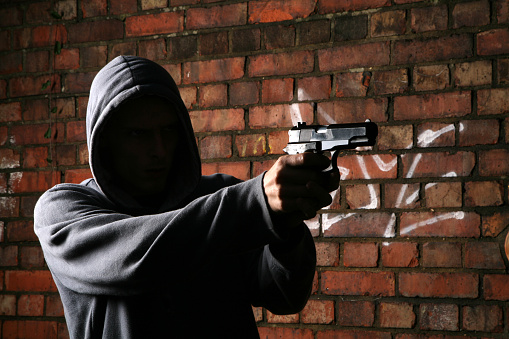 CCTV footage has emerged of heavily armed gunmen, who on Sunday morning attacked and robbed a woman entering her home in Gataka, Rongai.

The videos on social media show at least five men masked up following a vehicle as it entered a compound before forcing the driver out of the car.

The incident which occurred at 2:20 AM showed the driver who is a lady trying to resist by locking the car’s doors however the robbers used their weapons including a machete to forcefully gain entry into the car pulling the helpless woman out.

Footage further shows two men taking out valuables in the car while two other men whisked their victim into her house, one man stood guard at the gate.

Inside the house, footage captured one man harassing the lady as others gathered all the valuables they could come across.

There isn’t conclusive footage as to whether the lady in the video was harmed and what time the robbers left the premises.

Netizens expressed shock in the video questioning the security status of the area and wondering how the suspects got hold of heavy weapons which included an AK47.

Here are some reactions from internet users;

“That Rongai robbery cctv footage is cringe buana. Those ninjas should be shot to death if found. Also, an AK47 just to steal personal items? Are those really their guns or they are working for someone?" Fetty Waf said.

“I posted about two incidents of murder in Rongai last week and many doubted it. This well-documented robbery incident is proof that something needs to be done. This woman was almost being killed. It doesn’t matter what time she came home, she deserves her peace,” Robert Alai noted.

Netizens have urged the Directorate of Criminal Investigations (DCI) to embark on investigations into the incident and bring the suspects to book.

a woman was arrested over a car theft and drove to court using the same car.
Entertainment
8 months ago

Physical way applies to the normal old school burglary where an individual approaches the target in pursuit to acquire the personal belongings ...
Entertainment
6 months ago

Broke to most ratchet: Kamene and Obinna rank Kenyan universities

The two decided today was the day university babes from different institutions were going to be respected and receive their flowers while they still ...
Entertainment
8 months ago