“This was the first man who put me in the game, long live the King,” Ndovu Kuu said. 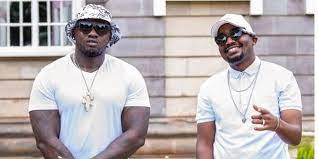 In a video shared on Instagram, Papa Jones is seen receiving a birthday cake from Ndovu Kuu in addition to a pair of Timberland boots.

In his own words, the ‘Ndovu ni Kuu’ hitmaker said that he opted to celebrate The Blu Ink CEO for being the first A-list artiste to share his spotlight with him when he accepted to jump on the remix of his song.

“This was the first man who put me in the game, long live the King,” Ndovu Kuu said.

Reacting to the unexpected gifts Papa Jones said: “My brother, thank you so much my brother, yaani umeniletea hadi cake na viatu buda. You were the first to do this,"

Other celebrities also joined the conversation wishing the rapper a happy birthday, upon turning a year older.

On May 21, 2021 Krispah featured Khaligraph Jones and rapper Boutross on the remix of his then trendy song ‘Ndovu ni Kuu’.

The music video to the song has so far garnered over 11 million views and counting on YouTube.

The tune gave Krispah (Ndovu Kuu) his breakthrough in the music industry and he has since then released a good number of hits.

Khaligraph Jones has recently been in the spotlight over negative remarks from his ex-girlfriend, Cashy Karimi, who accuses the rapper of neglecting their child.

From a post by the rapper’s girlfriend, Georgina, celebrating her hubby’s birthday, Cashy Karimi, seemed triggered by this and had a few things to share in regards to the birthday wish post.

Cashy on her Instagram stories wrote, "Haya basi tunapea "best daddy" macho tu. ( OKay then let us all look at the 'best daddy')"

She went on to add, "Do you all see the BS now? I think is clear for everyone. Lol, I'd rather be hated for being real than praised for pretending."

Cashy went on to highlight the age difference between her son and Georgina's daughter over claims that fans were asking so as to be able to put a timeline on their relationship and what happened in the past.

She wrote, " Guys some of you are asking my son's age to see if I home-wrecked or something, smh. This is the real timeline, Xolani (her son) - born September 2018- by me.”

After disrupting the industry with Khali Cartel 1 back in 2018, Khaligraph has made it his sole mission to uplift up and coming artists who have gone ...
Entertainment
1 year ago

What was surprising is the fact that most of the fans went for the artists who are 'banging now and forgot those who ushered in the current ...
Entertainment
11 months ago