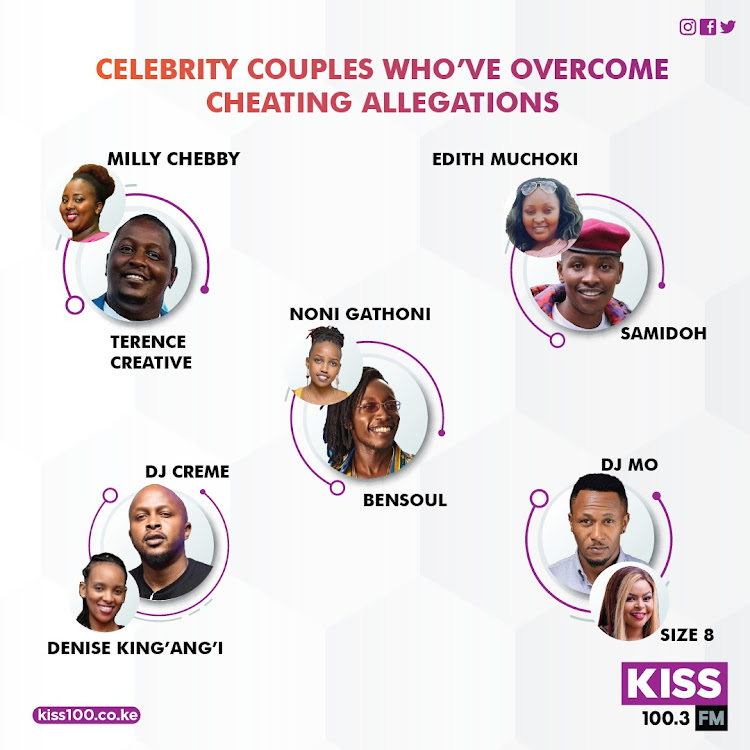 When people say through thick and thin, good and bad they rarely ever mean it but these celebrity couples are living proof that some actually do.

Love is a beautiful thing and according to the Bible it is patient and kind and forgiving among a whole lot of things so I guess these couples are the epitome of true love.

Because honestly sticking and forgiving a cheating partner especially when you are in the public eye and being scrutinized by everyone, full of opinions and judgement is not the easiest thing.

Bensoul cheated on his long term girlfriend Noni Gathoni and got another girl pregnant. He's expecting his first child with the lady in late July. Noni however chose to overlook the betrayal and stick with her man.
Samidoh has sired two kids out of wedlock with a popular politician and the whole world knows it but his wife has been by his side and till now never filed for a divorce.
DJ Creme's allegations were messy as videos of his cheating leaked, his wife obviously furious left but the two worked things out.
Terrence Creative revealed that he had cheated on his wife. He wrote, "Yes I cheated, through it I’ve learnt my lesson, Milly and I will talk about it someday.” Milly forgave him and the two rebuilt their marriage.
Size 8 being who she is prayed for her marriage and found the strenth to forgive her cheating husband, gospel Dj, Dj Mo.
She said, “‌It was important for us to stay private, to pray and work on ourselves. I felt we needed that time alone and to put God at the centre of everything,"
we spent the whole night together, praying and just telling God to defend us and fight for us,” she added.
Would you stick by a cheating partner?

Who's to blame?: A cheating husband or the mistress

he affected parties shouldn’t involve other individuals to the scandal.
Entertainment
8 months ago

Jalang'o: Why do you normalize cheating in relationships?

Jalang'o says the moment you start normalizing cheating then you should never blame anyone but yourself.
Entertainment
10 months ago

Kenyans gave their opinions in a Mpasho straw poll on dating and relationships
Trending
5 months ago
WATCH: For the latest videos on entertainment stories