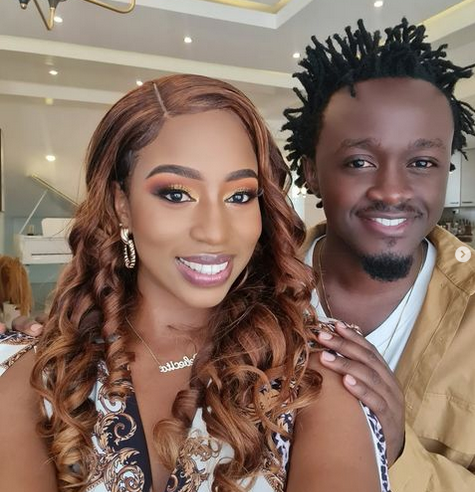 Diana B is clearly not having it with netizens who think they have a say in her life and how she conducts her living.

In the video, Heaven is seen seating on Yvette's lap playing with a phone when her when her mom calls her letting her know that Yvette wants to leave.

Diana captioned the cute video, "Just like that.... @HeavenBahati has found another Mummy. She Says Mama Mueni is her Mummy and whomst I'm I to say a word? Thank you @yvette_obura for visiting us... We Love you."

The video has elicited a whole lot of reactions with netizens both swooning over the bond between Diana, her kids, and Bahati's baby mama and his firstborn daughter Mueni while others termed the relationship as a big catastrophe waiting to happen.

One of the netizens who seemed to disagree with Diana being too close with her husband's ex is an Instagram user identified as @Elizabeth123033.

Elizabeth warned Diana from being too open to Bahati's baby mama, she wrote, " Diana I repeat ... you will regret it. It is just a matter of time, her second-born will be Bahati's kid once again."

Responding to the post, Diana asked the netizen to learn to mind her business before lightly adding that children after all are a blessing.

The two ladies have been on good terms after finally ironing out their issues.

According to a recent video on Diana's YouTube channel, Yvette revealed it had taken her four years to get over her anger with her baby daddy, artist Bahati, and finally forgive him and Diana Marua.

Video of the day: Diana B wants to give Bahati one more baby

In a video she posted on her YouTube channel,  Diana is heard saying her main goal is to make a baby as early as now so she can give birth before the ...
Entertainment
5 months ago

Bahati and Yvette Obura share a daughter
Entertainment
5 months ago